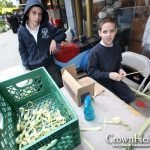 I am speaking to you today about a dangerous ailment that effects the frum community each year around Succos time. As we all know, our dear gadol Harav Shalom Rubashkin shlita has been ruined by an anti-Semitic decree against because people allegedly knew of him breaking child labor laws, there is no proof and most of the children had to work to food on the table anyway, but I am not here to speak of that outrage. The outrage I speak of is the child labor laws being broken in public by our own yeshiva buchrim and young ones in the minhag ysrael of allowing them to sell the arba minim.

I was walking down main street in Kew Garden Hills on erev succos and I was mamish flabergasted at what I saw taking place. Dozens of children, not even teenagers, mamish children were seen hocking lulavim, esrogim and all of their condiments on the street to adults. Any cop could have driven by and arrested dozens of their pimps (the adult hockers who run the underage lulav sales rings in Queens) This would have been a chillul Hashem unlike Rubashkin who is obviously innocent and even a martyr, these hocker lulav pimps will be caught red handed.

Rabbosy, I beg of you to heed my words, take the children inside the empty cell phone stores,m flower shops and old pizzarias to sell the arba minim and send older buchrim outside so we are not caught with our bekishes down.

← Rochester is different than I remember it
Strange and random conversation →

10 comments for “Haven’t we learned anything from Rubashkin”