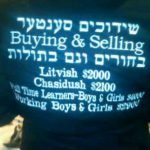 Many years ago, when I used to shidduch date I remember hearing the same story over and over again to teach me about the strange world of shidduchim. I wondered why no one ever bothered to just call it BS and rather they wanted to believe that such craziness could be remotely possible – I guess the frum community is capable of some pretty crazy things, which made the following story more believable.

The story goes as follows:

While stopped at a red light, the girl took the keys out of the ignition. The guy just looks at her and says “dude WTF are you doing?” and she says something along the lines of “you passed the test because you didn’t freak out” (if the story was real, he would more likely be in shock) to which he responds that she failed and kicks her out of his car.

Now I’m sure someone is going to tell me they heard this story from their second cousin who was in Sternberg pioneers with the girl who’s sister it happened to, but whenever I hear this story – it makes me wonder about people’s gullibility in the frum community.

← Non-Mevushal Wine Rant
Wedding benchers suck – give me something useful →

36 comments for “Biggest BS shidduch story of all time”