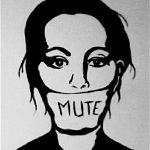 The other night, my facebook status read as follows: May actually do a Ta’anis Dibbur this year because shul for me is one long running commentary on how much this sucks. Of course, someone had to get offended and claim that I was just trying to piss people off – which I most definitely wasn’t. The status was more of a cry for help this sucks – “how do you deal with the sffliction of a long drawn out service that doesn’t really affect you at all?” After the woman told us she was offended there were actually some very nice and thoughtful comments concerning the practice of Ta’anis Dibbur – which is when one takes it upon themselves to refrain from talking the entire Yom Kippur. This means that I won’t be rambling on about how crappy the chazzan is, talking loshon horah about the Rabbis shoe of choice and having the all too present sex talk that men can’t seem to let go of – even for the holiest day of the year.

This was my original comment in response to the woman claiming I was merely making such a status to piss people off:

The point of saying the truth is so others can find solace in the fact that plenty of others suffer through shul and also debate about the same things I debate about – do you really think I sit around trying to think how to offend people. It;s not my fault that most frum Jews have the sense of humor of a 5 year old – but this statement wasn’t meant to be offensive or funny, the problem is that most people never want to admit the truth to themselves and I think of all times the ten days of reopentence are for the truth and the truth is that most people would probably rather be at work then at shul, but most will keep their thoughts to themselves for fear of no one else felling the way they do and this was actually more like kiruv in a sense to bring comradere to those who get nothing out of high holiday services.

I think a taanit dibur is a great idea– turns the day into a meditation. Heshy it probably will give you insight not just into how much jews talk nervously rather than accept silence, but how much Jews talk to god constantly rather than listen. Look how many words in the machzor!

Hey Heshy, it doesn’t make someone a blasphemer if someone would rather be at work than in shul. The truth is that it is not the religion that you are criticizing here. It is the length and monotony of the services. And God/Hashem never, ever said to sit in shul from 8 to 3 on Yom Kippur. He also never ever said that you have to read long poems written hundreds of years ago that are difficult to fathom and understand today and whose relevance is frankly questionable todays. Hashem did say to afflict oneself. That concept is open to interpretation. Although the term is most often used in the connotation of fasting. Nothing there about sitting for nine hours. If it pleases you to sit in shul for nine hours than by all means do so. If you would rather sit for four or five hours sit for four or five hours. But the point of the day is to have some kind of afflication and contemplation. I think that a ta’anit dibbur is a wonderful way to keep Yom Kippur according to its true spirit. It’s certainly better than yakking away in shul for several hours while pretending to have a spiritual experience. Here is the quote from the Torah about Yom Kippur: editors notes – he never put the quote...

Find out more about ta’anis dibbur on 4torah.com

13 comments for “Have you ever done a Ta’anis Dibbur?”