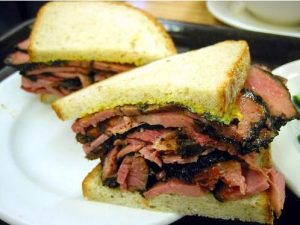 We are taught that we eat the head of a fish so as to enter the year on a positive note, rather than a tail, which would suggest a year of inferior quality.  How is this different from sticking pins into a doll and hoping that my belligerent boss winds up dead as a result?

Judaism promotes itself as a religion (or rather, the religion) of reality.  So what’s up with this apparent hocus pocus of simanei milsa (“signs are significant”)?

Suppose it’s your anniversary and you’re intent on making a show for your wife — what sort of gift do you get her?  Most would get flowers, some chocolate and others perhaps jewelry.  But suppose you get your wife a pastrami sandwich.  What would she think of that?

Along with the good anniversary wishes, the flowers and/or chocolate express to your loved one the romanticism and/or sweetness that your loving message carries.  I think pastrami is delicious, but for whatever psychosocial reasons, it just doesn’t exhibit the same message as a heart-shaped card and a bag of Hershey Kisses.

The Sages of yore developed a bunch of formulae that express our good wishes for the new year — our year should be as full of merits as a pomegranate is full of seeds.  My daughter asked why we don’t eat watermelon on Rosh Hashana because they also have lots of seeds.  After calling her out because it’s clear that watermelons don’t have nearly the seed density that pomegranates have, I thought about her suggestion.  One cannot say that the Sages were unaware of melons, for the Torah specifically recalls the melons of Egypt (Number 11:5).  Perhaps melons were not as plentiful when these formulae were written.  Or, perhaps it’s that pomegranates were seen exotic and glamorous while melons, like pastrami sandwiches, are not.

So are signs significant?  The formulae are important — we look at them like mini-prayers and we are merely taking the leek, the carrot or the fish head to drive the message home.  Dipping the apple in the honey without having the message in mind in like buying your girlfriend flowers and sending her the bill — tactless and ultimately self-defeating.