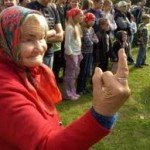 I may cook for the most goyishe restaurant in the world, but it’s still pretty frum when you look at the random little events that take place or that I get asked about by the servers who take things at face value until I can fully explain the cultural stuff behind what’s actually happened. Last night one of the servers came in and told me that someone at one table was walking to the bathroom and stopped at another table and said “Hey who are you” the woman responded and than they played Jewish geography – a perfectly normal thing to me – to be rudely asked “hey how do I know you, where’d you grow up, go to yeshiva or who’s your father?” kind of question by someone random, but I do admit that it must look really strange and downright rude to the outsider.

Well, it actually is rude, but it’s the cultural norm to want to know who someone is and if you have any connections to them – everyone’s connected and it’s always interesting to see how, but I guess it could be done in less rude ways, right?

On a regular basis, I have frummies who know me – poke their head into the kitchen, always during a partuicularly busy night asking to chat about “what’s good” – I always figured that fire shooting out of pans, rapid fire Spanish, a full house and chefs reading off fires, orders and servers bitching about sauce on sides would give some kind of hint to the madness that was taking place. It doesn’t help that the Kitchen Table is an open kitchen restaurant and it doesn’t help that fans from far off places want to peek in and say hello, but everyone else besides for frum Jews gets the hint that I’m busy. You can’t exactly say, fuck off to some rabbi or person who just had you for Friday night dinner.

I heard that some guy blew the shofar in the restaurant the other day, that was just downright strange, until my new boss (I have advanced in my cooking career and have gotten a second job at a catering company in San Francisco) told me that Rabbi Langer wanted to come in and blow the shofar, I guess it’s some sort of chabad thing to publicly embarrass closeted Jews by blowing the shofar in public. If you thought the public menorah lightings were embarrassing wait until they blow the shofar during a crowded dinner service where the half the place is non-Jews – I wonder if they thought it was blowing our horns?

Find out more about rude Jews on 4torah.com

19 comments for “To the outside world, frum Jews are just rude”