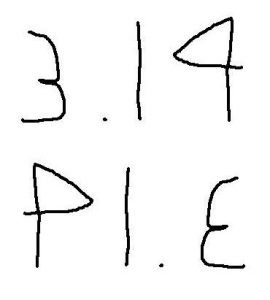 The ratio of the circumference of a circle to its radius can be approximated in the form of a fraction as 22/7, although it is more commonly expressed in decimal form.

According to the talmud, 22/8 is the fraction that represents the character of God.

A clever calculation, but it certainly begs the following question: why are the sections in Deuteronomy referred to as belonging to man?

The mishna (Bavli Megillah 3:6) states that, historically, we did not interrupt the reading of the curses to change readers, which in modern times would take the form of a ban on splitting the curses between two people called to the Torah.  Abaye (31b) qualifies the statement in the mishna, limiting the ban to the curses in Leviticus with the following explanation: “u’Moshe mipi hagevurah amran” — “and Moses stated this from on high,” in contrast to the curses in Deuteronomy, which are described by “u’Moshe mipi atzmo amran” — “and Moses stated this by himself.”

Rashi (Deuteronomy 28:23) provides textual proof to this end, revealing the obvious differences between the self-referential tone of the Leviticus curses [“v’im lo sishma’u li” — “if you do not listen to me” (Leviticus 26:14)] and the curses in Deuteronomy, which appear in second person [“im lo sishma b’kol Hashem Elokecha” — “if you do not listen to God Almighty” (28:15)].  Although there are those who maintain a contrary opinion (such as R’ Yochanan and Reish Lakish), there is no recorded objection in the talmud to Abaye’s position.

Now despite the suggestion that such a position may promote heresy, the biblical and talmudic commentators do not conjure such fear for many other instances of near-heretical interpretation of biblical verses, such as those referring to Moses seeing God wearing clothes (end of Exodus 33).  In fact, it appears that opposition to such an assertion — that Deuteronomy was a Mosaic innovation — was primarily from the sages of Israel, where sectarian influence was strong.  Abaye, from Babylonia, was not faced with such ideological defiance and so did not hesitate to speak his mind.

But what’s the point?  Why does it matter where the text of Deuteronomy came from?  Because there are those who claim that a multitude of authors each wrote different sections of, well, what we refer to as the Five Books of Moses, and to account for the striking dissimilarities between the first four books and Deuteronomy, we should be compelled to accept that the text, although later commanded by God to be inscribed as the fifth book to complete the series, was initially Moses’.  Is there any practicality that derives from such an assertion?  Other than Maimonidian permission to break apart the Deuteronomical curses when calling people to the Torah (Hilchos Tefillah 13:7), there is no real significance.  What it does do, however, is explain the textual inconsistencies of Deuteronomy as a function of the Ishmaelian perspective — if Deuteronomy consists of Moses’ words, it was not given together with the rest of the Torah on Sinai.  The Torah could not have been given in totality at Sinai, repeated in the Ohel Mo’ed (Tent of Meeting) and repeated once again in Arvos Mo’av (the Steppes of Moab), as suggested by R’ Akiva, if it hadn’t yet been completed, as suggested by R’ Ishmael.  So when we see opposition to Abaye in the form of aggressive refutation by the likes of R’ Yochanan (“whomever says that Moses admonished the Israelites on his own is but a sinner), it is not to be taken as the position of Judaism any more than it should be taken as a position in Judaism — and one that necessarily defends the honor of no less than R’ Akiva himself.