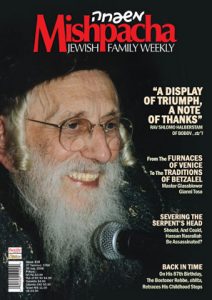 I was thinking of getting my chabad “in middle of nowhere” friends a subscription to Mishpacha Magazine because they are always starved for frum reading material and I heard it was pricey, so I figured I would be willing to throw down $50 for a magazine subscription if it helped people stay in touch with the frum world and all of its madness. Well my plan immediately came to a halt when I saw the price. If you wish to received mishpacha magazine and don’t live in the frummy ghettos of Lakewood, Detroit and LA, you must pay a whopping $200 a year in subscription fees.

I was just as shocked as you are, considering the fact that most of the best frum writing (that’s kind of moronic I know) is available for free online (maybe mishpacha is like frum porn – being able to look at something while unloading that cholent and kugel on shabbos afternoon does have its merits, but 200 bucks – seriously folks – it’s not even on the same wavelength as Atlantic, New Yorker or Esquire and they have the nerve to charge that much. Granted, it is published weekly and there isn’t much competition besides for Ami and Binah, both carbon copies of Mishpacha, but it still seems a bit steep for me and how are all those poor frummies able to afford the darned thing?

It could be that frummies don’t spend much on entertainment besides for mishpacha magazine and the occasional evening out to pizza, so maybe they could afford it, but what about all those missed kiruv opportunities? Shouldn’t a magazine of such high hasmadus be available to all Jews, not just frummies? I do wonder if anyone from mishpacha is reading this, maybe they are willing to give me a break on the subscription, after all it was for a starving chabad couple who lives very close to good skiing and very far from a tall mechitza or pizza store.

Search for frum magazines on 4torah.com