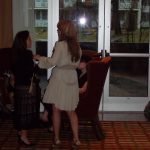 We recently had a chance to speak with Chani Greenblatt who is credited as being the first hot chani, originally from Flatbush, she moved to the Five Towns after marrying a successful nursing home administrator. They built a lovely home, but soon after having her children leave for yeshiva she felt bored and needed some excitement in her life. This was in the early 90’s, around the same time that sushi and salad was making its way into mainstream frum society. Chani decided to leave the house and venture out to Central Avenue to meet her friends for sushi and salad where they would gossip, talk about the newest strollers on the market and check out the Priority One guys working behind the counter. They liked the attention and soon Chani started wearing more revealing and borderline tznius clothing. Her friends began to call her Hot Chani and that’s how the term Hot Chani was born.

FS News: When did you first hear the term used? What was your reaction?

Chani: I think I was sitting at this YFR dinner and I overheard someone say that my sheitle looked like one of those hot chani’s, the women didn’t know who I was and I was kind of proud actually – despite the fact that they used it in disgust, I just think they were jealous of my hotness. Naturally I was kind of shocked that the term was being used outside of my little circle of sushi and salad friends.

FS News: Were you always hot?

Chani: I don’t know, it’s all really in the eye of the beholder, my husband thinks I’m hot, the off the derech kids who hang out in that little alleyway by the pizza store on central avenue think I’m hot, even my teachers in Prospect Highschool thought I was hot – they told me that the yetzer harah lurked in my beauty and that I could maintain my attractiveness, but I shouldn’t be attracting.

FS News: Do you get dirty looks?

Chani: OMG do I get dirty looks, ever since that dude from that blog publicized the term, I get such dirty looks, like “oh she’s so hot she can’t be frum” but I’m wearing a skirt and a sheitle, so what if I’m hot.

FS News: What does your husband think?

Chani: Him and his hocker friends love it, I bake them cookies and they all stare, my husbands friends all have hot chani-type wives and we go together places and everyone envies us.

FS News: Do you feel just a tad hypocritical wearing a sheitle and dressing so untznius?

Chani: I love how the frum community likes to automatically label beautiful women as untzius, that;s why I feel such a kinship to chabad, the women are just lovely and tznius – but since they are hot – they get a bad name.  The frum community should focus on its own problems before trying to make everyone ugly. So what, I like to wear boots and eat my sushi seductively, I’ve got my elbows and knees covered  better than any of those modernishe half hair covered ladies.

FS News: What do you see for the future of the Hot Chani movement, do you have any plans of forming some sort of official group, or is it going to just remain as something frummer than thou people use for loshon horah discussion at their shabbos tables.

Chani: My husband keeps encouraging me to go public, to make it into something more than a loose network of beautiful tznius ladies around the world, to publicize the fact that being frum and dressing hot and sexy doesn’t have to be an oxymoron. Unfortunately ,some ladies have given us a bad name. Many ladies were once proud to be hot chani’s, but recently we have become more like frum-sluts and it hurts. Now, when someone says someone is a hot chani – they mean to objectify them and that’s just wrong.

Find out more about hot chani’s on 4torah.com