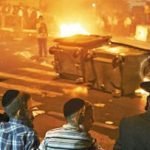 As many of you know, this past week in Bet Shemesh has not been pleasant one. For those of you who have been hearing bits here and there, or reading articles in the press, I’d like to give my account as a Bet Shemesh resident.

I’m not an Orot parent (yet! hopefully next year), and I don’t even currently live in Sheinfeld (the Dati Leumi neighborhood across from the school), but I lived there for three years, hope to move back sometime soon and am a Bet Shemesh resident. I’ve been here for eight years, and from the very beginning loved this city. The community of Sheinfeld is amazing, warm, and welcoming with terrific people and shuls. When we first moved in, the Ultra-orthodox community of RBS B was new, and expanding all the time. Slowly the buildings of RBS expanded until they were directly across from the border of Sheinfeld. Gezundeheit, welcome to the neighborhood.

When tensions started due to signs that were put up across the street demanding women who walk through ‘their’ streets be dressed properly, some Sheinfeld people decided to try and diffuse the tension. We had a Mishloach Manot program where each Sheinfeld family got a name of one of our new neighbors across the street and sent them a super kosher, badatz eida chareidit, closed packaged Mishloach Manot. Lovely, there were some very nice people who lived there and responded with thanks. However, not all of them were so warm to our greetings. Unfortunately, a group of what we now refer to as Kitzonim (extremists) moved in from Meah Shearim. This group self appointed themselves as G-d’s personal messengers to deliver messages to all those who they believe are not living their lives exactly how G-d intended us to live. The main point that they bring across with this is their twisted views of Tzniut (modesty). This has manifested itself in a number of ways, over the years including spray painting our property with their messages, chasing and screaming at teenage girls and boys from our neighborhood, spitting at the women who were wearing sandals, even throwing an egg at one girl from our area. I’ve heard psychologists say that this behavior can be stemming from sexual repression, but that’s neither here nor there. The point is, they moved into a mixed city, and started demanding that their new neighbors (who have been here for decades) transform into Bnei Brakers. Now, obviously, we are not total friars (suckers), although sometimes it feels like we are. This has caused various tense periods over the years, during flare ups.

Now that you have some background, here is the issue we are dealing with today. On the border of Sheinfeld, Nofei Hashemesh, and Nofei Aviv (three lovely Dati Leumi neighborhoods) sits a plot of land with two schools that mainly cater to those three neighborhoods. Orot Banim (boys’ school) and Orot Banot (girls’ school). Overlooking the girls’ school are the new buildings on the edge of RBS B that, due to extremely poor planning by the city, reach all the way on the border of ‘our’ neighborhoods. Orot Banot has been waiting for years for their building to be ready, and this year, finally, the girls looked forward to moving into their new school.

About a week before school was scheduled to start, our neighbors started causing some trouble. They broke into the brand new school, did some vandalizing, threw some rocks, and made it very clear that they were not happy about having a bunch of 6-12 year old Dati Leumi girls learning Torah next door to them. Unfortunately, our mayor is completely wrapped around the fingers of these horrible terrorists. (For that’s what they are, as the definition acc. to www.dictionary.com is

violence or threats of violence used for intimidation or coercion;

terrorism.) Our lovely mayor, Moshe Abutbol, may he be dethroned bimhaira biyameinu, sent out a message that the girls should not start school in that location, for fear that they may get hurt. Um, hello?!?! How about doing your job as advocate for the citizens of your city and removing the threat, instead of those being threatened? Shame on anyone who voted for this thug. Anyway, after 4 straight days of protests from our community (which he was clearly NOT expecting) B”H the school opened on time, and even uneventfully. Until earlier this week. On Monday, as the girls were getting dismissed, a large group of kitzonim showed up at dismissal, lined the streets on both sides, and made it extremely unpleasant for these little girls to get to their buses/walk home. They also threw a rock into the boys’ school and hurt a boy in the leg. They were carrying bricks threateningly. There was much shouting of Shiksa (non-jew) and Prutza (promiscuous girl). (Which, cutely enough, our girls thought they were being called Shnitzel and Pizza) There was chasing, shouting, even some shoving. Parents showed up as quickly as possible and the situation escalated. One of their ‘leaders’, a man named Moshe Friedman was quoted saying that they’ll fight every day for 20 years until there is no longer a girls school next door. Unnamed people from our side saw no choice but to fight fire with fire. They had ‘pashkeveilim’ (fliers) made up with some of the ringleader’s pictures on it and the caption “so and so likes to stare at little girls. How do we know? Every day they show up at Orot Banot to see them as the girls come out of school”. On Tuesday, they kept their distance from the school but gathered to shout across the street from Sheinfeld, and then took it even farther. A school bus from a school in RBS called Ahavat Yisrael, (incidentally the school my 10 year old sister attends) dropped off the Sheinfeld girls at the corner. The thugs actually chased two seven year old girls down the street screaming after them. What kind of person picks a fight with a little girl?!?! Needless to say, these little girls are traumatized.

After that, a request was sent out to parents, and members of the general community to show up at dismissal time to walk the girls down the block so they feel support, and don’t have to walk alone. In addition, if large numbers of parents show up hopefully it’ll deter ‘them’ from showing up. I went on Wednesday with my husband and my father. There were about 50-60 of ‘our’ men there, and many women as well, both parents and non-parents of the school, showing up for support. I made a couple of trips up and down the block with girls who needed to walk to the bus stop or their house across the street. It was the saddest thing, walking with these cute 10 or 11 year old girls and hear them saying as we walked down the block “Baruch Hashem the scary men aren’t out today”. Where are we that little girls need to be scared of men coming to terrorize them as they walk out of school?!?! From a violent point of view, it was b”H calm yesterday. However, all up and down Rechov Herzog ( the block of the school) there were verbal confrontations taking place.

Anyone who knows me knows that I’m not someone who likes to pick a fight. I’m peaceful, and by nature tend to believe the best in people. Having said that, I went over to a few of the Chasidish wives who were standing around and started talking to them. I said “hi, I just want to talk. I hate this battling between Jews. Can anyone here tell me what’s going on?” One lady appointed herself spokeswoman and starts shouting about tznius. I said ” relax, no need to raise your voice, I’m just here to talk. I want to hear what you have to say”. She said ” When I take my boys outside I don’t want them seeing girls in short sleeves and without socks” She went on in that vein for a couple of minutes. I let her talk, and then when she finished I said “I understand what you said, now please listen to me. Our community has been here for 20 years. The girls’ school was slated to be there before your buildings were even a thought in anyone’s head. YOU CHOSE to move into an already mixed city. You didn’t move to Bnei Brak, you moved to a place where there are all sorts of people walking around, and the men can’t go around terrorizing people if they don’t like how they’re dressed.” She had nothing to say to that and turned around and walked away, but not before one of her friends shoved the camera lady next to me.

Next incident… a bunch of the parents who showed up had their family dogs with them, all on leashes of course. There were many kids who were scared, and I felt bad because they were just little kids. I saw a group of chareidi teenage girls, probably around 13 years old. They were gathered on the sidewalk, clearly wanting to walk but scared of a dog. I have nothing against these fellow Jews, I went over and offered to walk with them past the dog. They stare at me like I’m an alien and one of them blurts out “Why did you Chilonim (secular Jews) build a Chiloni school next to our houses”. I felt like I was slapped, and when I retold it to a reporter a few minutes later I couldn’t keep the tears from coming. I went home feeling sadder about this absurd situation than I can even explain. I literally felt sick from it and couldn’t sleep last night.

Now, Thursday afternoon, I just got back from Orot and I’m happy to report that we did everything we were supposed to, as did the police. Non- Orot parents were stationed along Herzog to make the kids feel comfortable as they walked up to the bus. There was zero provocation from our side, everyone was just there to show support for the girls. We were able to see a group of the troublemakers start to make their way towards Herzog, but B”H the police held them in a little alley that met up with Herzog and didn’t let them come onto the street until all the girls were safely where they needed to go. They shouted their chants, but couldn’t get close to the kids. There was a bit of commotion when a single trouble maker started shouting and walking down Herzog from the other direction. The police ushered him into the path with the others, and when they resisted, took him away in a police car.

I don’t know what will be, and how this will end. I pray that somehow, these Kitzonim will quietly disappear from our beloved city of Bet Shemesh. However, until that happens we need to keep up the fight as peacefully as possible so as not to lose our city to them. We need the greater non-chareidi, and “american Yeshivish” community to not only support us, but join in the fight, because they need to realize that they’re next.

I know this was long, but the purpose was to show you the view of someone who’s here, who’s been here for awhile and who doesn’t want to go anywhere. I also want to dispel the rumor that it’s a two sided battle. That couldn’t be farther from the truth. This has been all the way through, a ONE SIDED provocation, with side two coming in to do what we need to do to protect our girls and our community.