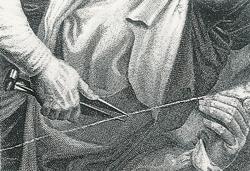 Fate is a difficult thing to discuss because there are many conflicting sources regarding Judaism’s position on predetermination.

Last week’s parsha discussed the incidence of conspiring witnesses who are executed should their ruse be discovered prior to their conspiracy succeeding.  Thus, if the execution they testified in favor of was indeed carried out, the Talmud (Bavli Makos 5b) dictates that the false witnesses suffer no punishment!  Nachmanides, based upon the assumption that the court would not err, explains that the man duly convicted and executed must have indeed deserved death.

This sounds very similar to the Ishmaelian understanding of the ‘law of the unintentional killer’ (Exodus 21:13).  Citing Samuel 1 24:14, “mashal hakadmoni meresha’im yeitzei resha,” (“the ancient proverb…wickedness derives from the wicked”), the school of R’ Ishmael explains the use of the phrase v’ha’elokim inah l’yado (…and God made it come to his hand…”) to refer to the unwitnessed intentional killer being killed by the unwitnessed unintentional killer and both now meet their appropriate fates — the former receives death and the latter must flee.

In this week’s parsha, we see a similar idea — that fate is circumvented, or at least postponed, by the actions of another.  Regarding one who builds a new home, the Torah commands:

“…you are to make a fence for your roof, and do not place a liability upon your house for the nofel may fall from it.” (Deuteronomy 22:8)

Properly translated, a nofel is a faller, but if one builds a fence and prevents others from falling, there are no fallers!  It’s like a sign at the crosswalk to warn drivers: “Please slow as you approach the intersection so as not hit the pedestrian victims of motor vehicle accidents!”

The Ishmaelian approach to this (Bavli Shabbos 32a) was that a person destined to have fallen from the roof could be saved by the homeowner’s piety in the form of his fulfillment of the positive commandment to build such a fence.

Yet nearly everyday we echo the plea of King David: “nipla nah v’yad Hashem ki rabbim rachamav u’v’yad adam al apolah,” (Samuel 2 24:14) “…let us fall at the hands of God, for he is merciful, but let me not fall at the hands of man,” implying that man has the existential freedom to do greater harm to others than God intends.

In reconciliation, perhaps one can suggest that both of the examples cited above are that which appear accidental or incidental — someone unintentionally contributing to someone else’s death and another tripping off the side of an elevated position, whereas King David spoke of a deliberate aggressor being somewhat too aggressive.