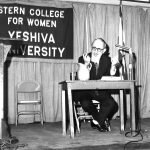 I had a short email conversation with someone the other day about what my hashkafa was, like most, including myself – I have a hard time identifying with any one group of Jews and tend to go to many shuls and follow many different philosophies on how to get closer to the Lord. When it comes down to it, you may say I’m a neo-chassidic modern orthodox dude. For labeling purposes I said I was modern orthodox and this guy wanted to know where there were any good modern orthodox forums or chat rooms. Whenever someone asks me about chat rooms, I always assume they are stuck in 1996 internet stage and not really up to date on how the internet works, either way, I started to wonder about modern orthodox forums and how the biggest orthodox Jewish forums are anything but modern orthodox.

I started going through the forums in my head, Hashkafa, I’m a Mother, Frum Teens and Yeshiva World News being the biggest I know of and they are all the type of forums where modern orthodox people may go to defend themselves against uneducated folks who deem to stick the modern orthodox on a spear for not really being frum, but a quick look at the discussion reveals that they are all far from modern orthodox.

Could it be that the modern orthodox don’t complain as much, because essentially the forums are places for folks without enough material to create a blog, to go and debate, complain and argue about issues they hold dear – of course half of the forum topics are geared to help start a fight about stupidity – like the one I saw regarding girls who chew gum on the street as untznius, or the one where people argue about whether or not Matisyahu is frum. It’s like bringing shabbos table talk to the internet, all of those stay at home moms and desk job rat racers can hang out all day and get mad about their current communities without doing a darned thing to help it.

Sure, the modern orthodox have similar problems facing them that their frummy brethren have, but it doesn’t seem to be important enough to create a forum, maybe since the women also have careers it’s less people to join a forum. It does happen to be that the number one topic on most of these forums is tznius, something to do with how untznius girls are these days (I’m sure the conversation has been taking place for hundreds of years) or what we should do to keep tznius in place. Then there is talk ofg how to make the shidduch system better and lots of talk about how to support people in kollel.

I wonder what the modern orthodox would talk about on their forums?

Find out more about frum forums on 4torah.com

← Do you go to whole foods?
Jewish music that doesn’t suck →

23 comments for “Ever wonder why there are no modern orthodox forums?”