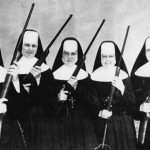 I love flattery, especially when it comes from seminary girls who spend their days learning how to be good balebustah’s and their nights reminiscing over cheeseburgers and the days before shomer negiah.

You may or may not know, but you’re a big hit amongst us BT/convert seminary girls. We were passing around the following list the other day and thought you might enjoy it. It’s certainly not as funny as your material, but I think you’ll be able to see the influence…

You know you’re in a BT seminary when…

You give your kallah teacher sex advice.
Every time you say “Baruch HaShem”, you giggle a little.
There was huge machlokes on “Jersey Shore” last night.
You’ve recently gained 15 pounds.
Benchophobia has turned into brachaphobia: “There’s puffed rice in my granola?!?! Oh f*ck it, someone get me a slice of bread!”
You ask the rabbi if you say a bracha on “fragrant herbs”
You have VERY detailed questions on which sexual acts are asur.
You never knew you could be so horney (B’’H female masturbation isn’t asur).
You use “mamash” and “dafka” incessantly and incorrecly.
Shomer Chadash – only shomer with people you’ve recently met
The tables in the Beis Midrash wear long pleated skirts, but (because?) the girls don’t.
You have commitment issues when it comes to bread, but not shidduchim.
You’re older than some of the Rabbis.
“Frummy” is much more insulting that “Haredi”.
It still takes you ten minutes to say asher yatzar, but you no longer feel self conscious saying it.
A good lunch is one that doesn’t feature hot dog chunks.
You earnestly avoid speaking lashon hara.
“Flamer” has a whole new meaning.
You’re no longer repulsed by crusty washing cups but you still wash after washing.
You learned a large percent of your yiddishkeit from FrumSatire.com.
You lose sleep worrying that one day when you get married, B’ezrat HaShem, you’re going to bee too good in bed.
You wear thongs even though none of your clothes show panty-lines.
The Beis Midrash has a copy the Frumspeak Yeshivish Dictionary and it gets used more than the Hebrew Dictionary.