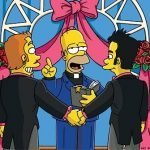 Judaism believes in cause and effect. Do that which is evil in the eyes of God, you go to hell. Too much masturbation, and when you reach the pearly gates you are greeted by millions of neshamos crying out “we could have been God fearing Jews, but instead you spilled us on the ground (or flushed us down the toilet, or left us in the chopped liver for fans of Portnoy’s complaint.)” They then escort you into the roaring fires. Now, if you have a bris milah, Avraham Avinu drags you out anyway (not sure what women have to do to get on his good side,) but it’s probably still pretty scary. (As a side note, Breastlover Chassidim grow long peyos so Rebbi Nachamn will drag them out of gehennom; when a prominent chassid was asked “but don’t you have a bris milah already?” he replied “I’d rather get dragged out by my peyos than by my bris milah”). Unintentionally found a new religion, you get boiled in crap.

But cause and effect doesn’t only play out in the next world. Not following the commandments has a very real effect in this world (for a more complete understanding, see Derech Hashem, if I remember correctly around Perek 15-23.). In fact, the Torah is replete with dire warnings of immediate consequences for those who do not follow its ways. The most obvious manifestation of this is, of course, the Holocaust, which happened because of Reform Judaism. While the yidden in the Shtetels were busy finishing shas at 13, the Jews in Berlin were busy marrying goyim and changing their names from Herschel Himmelstein to Heydrich Hausenbergshtein. And that’s what caused the Holocaust.

Recently the Gedolim in Eretz Yisrael attributed the escalation in violence between Israel and Gaza to the slowdown in learning during bein hazmanim. A little closer to home, the east coast earthquake was a direct result of legalized gay marriage in New York State. The venerable Reb Heshy Freid was the first to point this out, but a number of other leading gedolim quickly endorsed the idea. I believe Rabbi Yehuda Levin said it best that “you have shaken your male member where it should not be shaken, therefore I shall cause the world to shake.”

(Ai, you will taineh (huge thumb dip right here) gay marriage iz duch assur in Virginia, so why was it centered there and not in New York? Pshat is , in Virginia they are klerring to make it legal, meaning they are at the haschalah of the process so they got the haschalah of the earthquake; mah she’ain kain New York where it is already legal, so they were already gomer the process, so they got the g’mar of the earthquake. Mamish aizen, no? What a lomdishe vort.)

Yes, the Gays caused the earthquake. And the earthquake made me lose my virginity. Ergo, ironically, I lost my virginity to the gay community. All that shaking and quaking did more damage than a whole summers worth of horseback riding in Oorahs girlzone. But losing my virginity wasn’t just a drop painful. It also lowered my value from 200 zuz to 100 zuz. Also, when I get married, they will read my Kesubah out loud under the chuppah and everyone will know I am not a besulah. Therefore we are initiating a class action lawsuit against the gay community to recover (a) 100 zuz of lost value (b) unspecified damages from emotional trauma. All interested in joining should get in touch with us through Frum Satire, and we will proceed accordingly.

Search for Bais Yaakov on 4torah.com

13 comments for “How gay marriage stole my virginity”