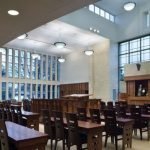 I was bored in shul this past Friday night, so I decided to do a statistical analysis of the people in attendance. I first counted out 120 men, then started breaking it down a bit more, I noticed very few light suits, even fewer folks without suits, 13 people wore colored shirts and there were approximately 50 black hats, one gray straw hat and I started wondering whether or not a black hat shul was literal or if it were the hashkafa.

I was doing this all in the flagship shul of the American Kiruv Industry, Ohr HaTorah in Dallas Texas. The shul is enormous and kind of overwhelming at first, I walked in late and couldn?t find a seat, no one offered to find me a seat, but giving these Kiruv Professionals and Flaming Baalei Teshuva?s the benefit of the doubt I assumed they were all lost in the beautiful prayers of kabalas Shabbos and too petrified of the Lord to find me a seat, or even welcome me into their lair.

Once upon a time ago in 2009 I lived in Dallas for almost 6 months and my perceptions have since changed. Like anything, my experiences before moving to Dallas and after moving away have shaped my worldviews and other things ? so it?s not surprising that things have changed. Not to mention, that being Dallas?s Ohr HaTorah didn?t become the poster child of the Kiruv Industry by laying back and letting people come to them. The community has grown exponentially since I lived there merely 3 years ago and it?s not only converts and baalei teshuva, regular old folks from Brooklyn and New York are moving there because it?s cheap, very right wing and according to everyone in the community ? it has all you could ever want within 15 minutes. (this attitude is one of the reasons I hate Dallas as a city so much ? ?when people say all you could ever want? they mean and abundance of strip malls, chain stores and Wal Marts on virtually every corner ? they don?t mean parks, independent bookstores, jazz clubs and farmers markets)

When I first came to Dallas I thought it was the friendliest place on earth, not saying it aint friendly, just saying that coming from Monsey it was mighty friendly, but coming from the Bay Area it?s just regular friendly ? but it?s not too overt ? for instance on Friday night one Rabbi asked me if I was set up for meals, but on Shabbos day no one invited me over. Now let?s get this straight, people said good Shabbos, no one kicked me out of their seat and I didn?t get any dirty looks for wearing sandals and an untucked shirt (I did buy new tzitzis the day before at the new seforim store in Dallas, so I wondered if my bleached white strings, combined with my goofy black velvet yarmulke made me look like a run of the mill flaming BT who doesn?t know the social mores of the black hat community yet.)

I personally think that sooner or later Dallas will be invaded by New Yorkers looking for an out of town community with all the amenities of home and like all gentrification areas ? eventually it will just turn into another Monsey ? where you have people who remember the old times and say it was never intended to be a cheap alternative to New York and they have no idea how they lost their small out of town community charm.

One with a keen observational eye would be able to tell in about two minutes the hashkafa of any shul, merely look at the seforim and siddurim in a shul can tell you what you?re in for, not to mention the fact that in Dallas they have tons of those super frummy, super pricey dark cherry wood book cases in back of the shul featuring enough Artscroll and Feldheim propaganda, ahem seforim, to build up a counter army to the Rebbe?s army. There were no koren sacks siddurs, philosophy books or the ever present Herman Wouk, no books on Israel, none on the holocaust and I couldn?t even find Hirsch amongst the texts crammed into the book cases. Good thing I found me a mishna brura, or I would have had nothing to do the whole laining. The lack of singing is another clue into the black hat shul, sure they sing, but it?s always half assed and it?s always these yeshivish tunes that everyone hums along with because God forbid we have anything spiritual in shul. As they say in the chassidishe velt, the tie is the yeshivish gartel that separates the head from the heart.

Luckily it was a Bar Mitzvah this past Shabbos, so I had the opportunity to witness one of the lamest mazel tov renditions I?ve ever heard and if that wasn?t black hat enough, they decided to make a yeshivish carlebach bima encirclement that reminded me of Hoshanos in Crown Heights, where no one actually knows what?s going on.

One of the best things about Dallas being the kiruv shul of the century is that it makes for super fun BT watching and in my case, figuring out who?s a BT and who?s not, it?s a pretty tough game ? because those kiruv professionals in Dallas are really on their game, so you have people who blend in perfectly who aren?t even Jewish yet ? no other kiruv institution does such a good job as Ohr HaTorah and DATA in grooming their converts and BT?s for the social norms of orthodoxy, they may not be Jewish, but their yarmulkes and tzitzis are in perfect position, making mine and other professional BT observer jobs very tough. For instance there was a guy sitting next to me at lunch, I?m telling you, this guy had it down ? sure his and his wifes names were secular beyond the normal Josh and Rachel, but I could have sworn they were both FFB?s and I was stunned to find out they weren?t.

Most of the time, the best way to out a BT is by looking at their yarmulke style, whether or not it?s placed right and whether or not they are wearing fasteners. How people hold their siddur is another way to tell a BT from an FFB, most FFB?s use their finger as a book mark, but BT?s hold onto it for dear life. It happens to be that in Dallas, they say Anim Zemiros and I could out all the BT?s as the folks who didn?t know it by heart (this is somewhat faulty, because really frum shuls never say anim zemiros and I do not know it by heart because as a kid I was never in shukl that long and in yeshiva we never said it.) I think that OT in Dallas makes some exceptions to the all-out yeshivish rule, for instance there is no mechitza at the Kiddush ? even though most everyone stays on their own sides. I also noticed that instead of saying the regular prayer for Israel, the Rabbi, right before he speaks ? gets up and says the shortened version for the Israeli Army and the one for the US, but no prayer for state of Israel and no one says it along with him.

I think the best thing about this shul in Dallas may be the Kiddush, sure the ladies stay separate from the men, but you can totally check em out and apparently the men give them 5 minutes and then swarm in on their cholent. They had 3 cholent pots on the men?s side of the Kiddush, they even have a cholent nazi ? the guy who serves your cholent and you get what you get and can?t argue and if you do he takes it away from you. Within 10 minutes of the Rabbi making Kiddush ? there was almost nothing left to eat. It?s really an unbelievable thing to witness the locusts and on top of this there was no garbage can so the place was a pig sty afterwards.

I?m willing to bet that as soon as some of those folks in New York who keep complaining about cost of living grow some beitzim and ?discover? Dallas, it will turn into another Monsey. I?m hoping it doesn?t, but sooner or later, someone is going to wake up and realize that they can buy a house for a couple a hundred grand in a fully functional frum community complete with chinuch all the way through high school and beis medrish for both boys and girls and start to flood the place with folks itching for the ?out of town? lifestyle.

Find out more about black hats, baal teshuvas and the Dallas Jewish community on 4torah.com

47 comments for “The flagship shul of the American Kiruv Industry”