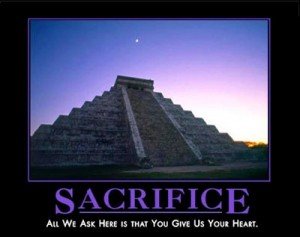 Moses begins this week’s parsha with an emphasis on the Temple and its centrality — both physically and figuratively — in the future of Jewish life in the Land of Israel.

Although the Israelites had had a Tabernacle for the duration of their time in the wilderness, there will be fundamentally new, almost inordinate, focus on the makom asher yivchar Hashem Elokeichem, “the place that the Almighty, your God, will choose.”

If Jewish life revolved around the Temple and its services, and it could readily be argued that it did, how can one suggest that there is anything inordinate about a focus on the Temple and its environs?  Well, the answer may lie within the dichotomy we spoke about some time (here and here) ago between didacticism and mimeticism.

What was the need for the Temple at all?  God might appear dualistic when he asks, “for what purpose is all these sacrifices?,” bemoaning the service and supplication he is given (Isaiah 1:11-14), or downright rebuffs the entire institution by claiming that “it is not sacrifice that I desire.” (Hosea 6:6)

The simple response is that the prophets were speaking to the heart of the nation, trying to get through to them that the Torah demands action only because it is more easy than demanding intention, but that it is truly the intention that God is after — so without the proper mindset, the sacrifices are but empty carcasses.

The Jews sinned and their Temple was lost, only to come again, and be lost once again.  We are still in that period, and Jewish tradition maintains, although there is little clarity in the details and much debate over specifics, that with the coming of the Messiah, there will be another Temple.  Can there be a Temple with no sacrifices?

We all look at this situation and take varied stances, but one thing’s for sure — modern-day Judaism is quite far from its idolatrous beginnings.  The Ishmaelian school brings v’lo yizbachu od, “that they should sacrifice no more,” (Leviticus 17:7) as proof that the Jews worshiped the Egyptians gods, and explains the Temple services and rituals as rehabilitation.  But if we no longer have such a drive, how can we relate to that which we put so much emphasis on in the past and seemingly place such an emphasis on in the future?  In essence, if R’ Ishmael is right and the bulk of Judaism is to allow its members to break free of idolatry, how are we supposed to relate to Judaism when idol worship wouldn’t even make it to the top hundred things on our bucket lists?

I suppose it’s necessary, then, to recognize that, despite the claim of its timelessness, the Torah is, in fact, very dated.  That’s not to say that it’s inapplicable, but it’s certainly quaint.  Imagine a world in the distant future where gastrointestinal consumption has been utterly replaced with quick venipuncture supplements — won’t the kids in 3rd grade smirk when they learn that the Torah forbids boiling a kid in its mother’s milk and the teacher goes on a long-winded explanation to define both “boil” and “milk.”  But that’s a negative precept — what about the commandment to eat matzo on Passover?  That will be just as quaint, seeing how they only eat to be compliant with religious observance.

That might seem ridiculous, but it’s really no different, conceptually speaking, with our observance of the many laws related to idolatry (or anti-idolatry, I should say).  From the Torah’s perspective, it really makes no never mind what the origin of the law was, how it came into being or why God, perhaps, mimetically included it in his divine instructions.  If by the time the Messiah arrives, civilization has progressed to a point such that no one can ever remember hearing of an extant monarch, will a Jewish king still make sense?  I don’t know, and we’ll see when we get there.  The fact that all these institutions — sacrifices, kings, idolatry — don’t seem to make much sense anymore are only because times have changed and they wouldn’t have been put into play had the Torah been given today.  But the Torah hasn’t been given today, and the laws that were mimetically given, essentially, must be dadactically accepted.