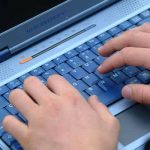 I feel so technological, I’m sitting on a virgin flight from San Francisco to Dallas and I’m on the internet, I also happen to be half watching Sreve Wozniak talking about the future of Apple on CNN – such multitasking is unknown to the Hesh. I do know now that NY has the potential to be destroyed by Hurricane Ilene and that I may have to make another video that blames it on some ill of the Jewish community, like the lack of tznius or the money spent on simchas and not on tzedakah’s.

Now I know that many of you may be wondering how a poor broke fellow like myself could afford such pricey internet as they do on flights such as these, no way in gehenom would my cheap Jewishness fork over $13 for internet that I do not need, but while I was surveying the scene at the airport I noticed some folks marketing from google chrome and I naturally asked if they were giving anything away. God must have been happy with me, because they were giving away something free – they let me check out a samsung chromebook which I only needed my boarding pass and ID to do and they said I would get free internet, so why the F not?

All I can really say is that all you people living on Long Island better get the heck out of there and it seems that NY may be damaged enough to bring a lot of moshiach cries. I wouldn’t know this if I wasn’t getting my first dosage of TV in months.

search for Jewish stuff on 4torah.com

68 comments for “My first time blogging from an airplane”