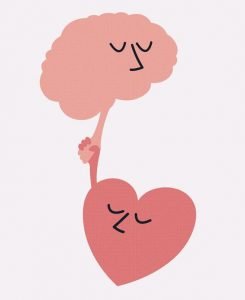 This week will be my seventh wedding anniversary, so I figured I’d discuss something related to love.

What is the lev?  Well, it’s usually translated as the heart, but of these 12 textual occurrences, none can possibly refer to the heart.  In anatomically and physiologically sound humans, the four-chambered heart consists largely of involuntary muscle and is responsible for pumping blood through the many blood vessels that exist throughout the body, thereby providing the cells with oxygen, nutrition and waste removal.  When Moses speaks of God “testing man to see what is in his heart,” (8:2) it was not meant to be the first blood test.  And when Moses tells us that “it is not because of the “yosher levav’cha (straightness of one’s heart) that we will come to inherit the land,” (9:5) was this an error based on Moses’ misconception that the heart lies parallel to the long axis of the torso, rather than tilts slightly to the left at its apex?

Of course not.  Just as we explain all references to the body parts of God — “…and the strong hand and the extended arm with which the Almighty, God, delivered you…” (7:19), “…written with the finger of God…” (9:10), “…what is evil in the eyes of God…” (9:18) — as literary tools to better allow man to perceive the meaning of what the Torah intends to convey, so, too, the word lev is used to convey a sense of emotion and passion, allowing people  to better grasp the way the Torah wants us to understand its teachings.

Initially, this seems very suggestive of the Ishmaelian approach, in which the Torah speaks in a style in keeping with the conventions of human language.  Aristotle and Galen, who lived about 1000 and 1450 years, respectively, after the giving of the Torah, are among the very many exceedingly prominent figures in the history of science who endorsed the idea that the heart, rather than the brain, was the seat of emotions, and even as it was later discovered that the mind and its components are inexplicably tied to the brain, the heart continued (and continues, still) to enjoy widespread poetic assignment as the organ of emotional and spiritual capacity.

But what did people in 1312 BCE perceive as the function of the heart, so that when they received the Torah it would have made sense to them that the heart was used as a metaphor for the mind?  The Torah had to make sense to the generation that received it — that’s for certain.  Maybe the Torah was speaking as everyone understood reality — they all thought that the heart was the seat of emotion and they were understanding it literally, and it was only years later that it began to be taken as a metaphor when science caught up with reality, and the Torah was thus able to retain its original intent, even if the understanding of that intent shifted through time.

Or,  perhaps something quite different: maybe lev really means ‘mind’ and not ‘heart,’ and it’s not a metaphor at all.  Rather, the Torah actually refers explicitly to the mind in these and so many other instances (such as God hardening Pharaoh’s, well…mind in Exodus 10:1) but when it became conventional wisdom established by the ill-fated speculation of early scientists that the heart was the seat of emotion rather than the brain, it was then that society essentially moved the mind of emotional disposition to the thoracic cavity and the lev of the bible became the heart.  The words of the Torah were not mimicking man; man replaced the definition of lev from the literal “mind” to the figurative “heart that is meant to refer to the mind.”

Is there a biblical reference to the anatomical heart we all know and love (ha!), or is it so that biblical uses of the term lev translate equally well as ‘the mind’ in the sense of emotional, spiritual and psychological disposition?  King David wrote of psychological introspection as “communicating with one’s heart” (Psalms 4:5), disposition and the repository of secrets as “heart” (7:10-11) and depression as a “broken heart” (69:21), but one may posit that these were meant as a form of poetry and were written in such a linguistic style.  The Book of Daniel includes the word lev 15 times, but none refer to anything that doesn’t refer to the mind.  The Prophets include use of the term, but also as general symbolism for emotions, passion or psychological disposition (Samuel 2 14:1, Jeremiah 17:9-10) — but then again, the bible has a poetic swing to it, so perhaps none of this constitutes evidence in support of either explanation.

I did find at least one reference that appears to reject this hypothesis: Yoav, the nephew of King David and the commander of his armies, killed David’s rebellious son Avshalom by stabbing him with three darts b’lev — “in the heart” (Samuel 2 18:14).  I can’t imagine that this could mean anything but the beating organ in Avshalom’s chest, but the Book of Samuel was written some few hundred years after the Torah was given…how long does it take a term to morph?  I’m not sure, but how long did it take awesome to mean great, cool to mean “awesome” and fat to mean “cool”?

The questions therefore remains: what was the original, poetically-unadulterated definition of the Hebrew word lev — the ‘heart’ or the ‘mind’?

(I don’t possess a Tanach in an searchable digital format, but if any of you do, perhaps you can let us know if there is a use of the word lev in the Five Books of Moses (and perhaps the Book of Joshua) that necessarily refers to the anatomical organ rather than the figurative source of emotion.)

33 comments for “Dvar Torah Eikev: I Think, Therefore I Love”