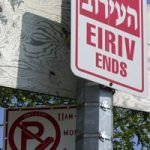 Crown Heights is one of the last major frum communities to not have a wall built around it so people can carry on shabbos, it’s a shame too, because with the amount of beautiful single girls running around, I’m sure they could attract a large single male population looking for some modern chassidic love, if only the men could carry their tefillin on shabbos. I have several friends who have left Crown Heights over the years because the women folk in their brood wanted to leave the house on shabbos – I have been told that Chabad is so open minded that they not only let the women-folk exit the kitchen, but they can even leave the house during the weekdays, but on shabbat, like so many agunot – they are chained.

The Crown Heights eruv would be a boon to the community, for all people who don’t hold of z’manim there and end up carrying on shabbos, it would make them putter from their sins. It would also allow the community to grow so many more non-lubavitcjhers could move to Crown Heights to be close to the Rebbe, I’ve heard that many folks have been faxing letters to the ohel in support of the eruv and that some chabad houses in far flung places have put up mini-eruvim around their yards to show their support.

Now it’s up to us and the CH eruv folks on Facebook to try and rally the crowds. I have been told that the eruv will be built as a bi-partisan project,  yechi, antis, undercover meshichists, gezhe, non-gezhe and elokists are in support of this worthy project.

Search for eruvim on 4torah.com