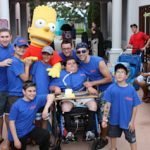 Dying sucks, it’s one of those things I hate to be reminded of and quite frankly like most people I like to think of myself as immortal, but being a kid who knows you’re gonna die soon sucks even more and that’s where kids of courage comes in to try and  improve the lives of terminally ill children. A dear fan of mine in Palo Alto has been bugging me for sometime to write about kids of courage, but until s9omeone in SF this past shabbos told me about the amazing things they do, I thought it to be another lame organization.

When I’m around older folks who are in their last years it’s hard for me to keep from tears, so I can’t imagine what it would be like to go to an event where a bunch of doomed kids are in attendance, I feel like it would be awe inspiring and gut wrenching at the same time. Kids of Courage is an organization that was founded to take Jewish children on trips and to events before their impending deaths. Dying blows, so I guess getting to go on a ski trip is a good thing to do – unless you hit the half pipe and aren’t experienced.

On a more serious note, this dude told me that they had one kid on this ski trip who had to be hooked up to all sorts of machines so they strapped him in and told him to hold on for dear life as someone else skid along side him. According to the website for the event in Palo Alto – there are going to be some pretty messed up kids this year so bring your kleenex to wipe your tears away and maybe a tehillim to give some thanks to the lord for giving you legs or a normal functioning body.

COME!!!! to a beautiful, inspiring dinner at the OFJCC on August 21st with KIDS OF COURAGE! Enjoy an amazing performance by the TNT Dunk Squad (http://www.tntdunksquad.com)!

Imagine a ONCE IN A LIFETIME 8-day adventure for ONE HUNDRED AND FIFTY chronic and terminally ill children from all over the country. Help this dream trip to San Francisco come true by joining Kids of Courage for a wonderful event!

Kids of Courage is a volunteer-based, non-profit organization dedicated to improving the lives of Jewish children and young adults with serious medical diagnoses. Kids of Courage is coming to the Bay Area this summer for a nine-day summer-camp trip, bringing ONE HUNDRED AND FIFTY critically-ill children with a variety of serious illnesses.

The campers this year include, but are not limited to:

…And they will all be experiencing San Francisco on a medically supervised adventure trip. INCREDIBLE!

Chesed week is sponsored by Heshy Fried who has agreed to forgo a week of interesting comments and ad revenue to give back to the community and improve his shidduch resume.

Search for chesed projects on 4torah.com