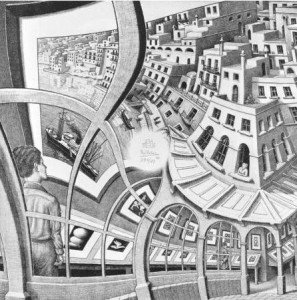 If one takes a moment to consider it, it’s really quite extraordinary that the Torah includes information about the giving of the Torah — it sort of reminds me of an Escher drawing.

The Torah does this twice — once in parshas Yisro (Exodus 20) and for the second time in this week’s parsha.  But the two accounts are dissimilar in many, many ways — what in the world is going on?

Abraham ibn Ezra ponders this puzzle, magnifying it with such an elaboration of questions that it almost seems as thought no satisfactory answer will be possible.  But comes Heshy’s favorite Shabbos ballad with what initially appears to be a very neat solution: “shamor v’zachor b’dibbur echad” ([both the words referencing Sabbath observance,] shamor (from Deuteronomy) and zachor (from Exodus) were stated together).  But if that’s the case, asks ibn Ezra, were the full texts of both versions also states together?  Chazal don’t make that claim, and it’s not difficult to see this mode of reconciliation start to unravel.  As closing proof, he cites the duplicate inclusion of a novel terminology in the Deuteronomy version: “ka’asher tzivcha Hashem elokecha” (“in the way that the Almighty, your God, has commanded you”) — once in the 4th commandment (5:12) and again in the 5th commandment (5:16).  Why the reference to God having commanded us?  Is it possible to suggest that God would have uttered these words?  No, explains ibn Ezra.  So what are we to make of this oddity of close-but-no-cigar repetition? Well, he claims, the text of Deuteronomy was Moses paraphrasing God.

This opinion is echoed by many: according to R’ Yom Tov Lipmann Muelhausen, anyone who claims that Deuteronomy originated in Heaven is falsifying the Torah.  In agreement, R’ Joseph di Trani stated that it appeared from the language of the book that it was from the mouth of Moses.

Mordechai haKohen of Safed explains that the other 4 books were spoken by Moses by instruction from on high, but that this was not so with Deuteronomy, which he spoke by his own mouth (and presumably by his own mind).  In response to the confusion that arises from there being two versions of the 10 commandments, he explains that Moses, in speaking on his own, felt that it would be inappropriate for him to say “remember” when he was but an imperfect mortal, susceptible to forgetfulness — he thus substituted “observe.”

Rabbeinu Bachya softens this position by saying that the Five Books of Moses were really the Five Books of God — all of them — but that Deuteronomy was spoken by Moses consistent with the intent of the Almighty.  No one doubts that Moses had free will and was able to, say, sit here or sit there or wear this tunic or that tunic…but there is considerable debate as to whether or not Moses did anything on his own when it came to Torah or what would later become Judaism.

Rabbeinu Nissim and the Maharal of Prague both claimed (along Akivan lines) that Moses could contribute nothing of his own as the passive recipient of divine prophecy and instruction.  Thus, when he stated the text of Deuteronomy, it was that Moses spoke and God agreed with him.  I don’t exactly know what that even means and it sounds like a paradox — that’s probably why R’ Ishmael didn’t say it.  It certainly appears to be an attempt at qualifying that Moses didn’t speak on his own by saying he didn’t speak “entirely” on his own.

So what’s the whole point here, you might ask.  Well, it’s really just that all of this is out there but almost no one talks about it.  All who claim to “know the mesorah” might be able to say they haven’t heard of the first few I quoted, but won’t be able to say they haven’t heard of the last few.  As we proceed through Deuteronomy, I’d like to develop further the polarity of the Akivan-Ishmaelian approaches, and I know some people will be protesting sharply in their attempt to protect Judaism from what they sense as a heretical attack on fundamentals, but what they really do is block themselves from truly appreciating Judaism in favor of maintaining a 3rd grade approach towards this complex entity we call religion.  The funny thing is that it is the Akivan approach that if left untempered can lead to actual heresy in the form of suggested divine proximity, space occupation and corporeality.

As an aside, this suggestion was very strange indeed, in that I don’t think any classical Jewish biblical commentator discusses it.  I guess it’s a Christian thing.

← The guide to getting busy in the shidduch world
More than 300,000 Israelis Protesting →