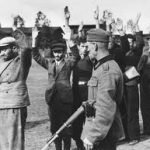 I’ve heard the complaints dozens of times and have made them myself, but for some reason Tisha B’av is the one day in the Jewish tradition that gets the most complaints in the department of “I can’t relate to this day, why am I doing this?” which strikes me as odd, considering the fact that so many days in our religion are hard to relate to. I myself cannot relate to the Jews leaving Egypt, rolling up to Jerusalem to live in Hut or sacrificing animals to placate the Lord, yet besides for Tisha B’av a day which I think we can all relate to a lot easier than many of the other days – seems to get a brunt of the complaints.

I myself used to find it hard to relate to, when thinking in the terms laid out in classical texts that is, there is no way I could even imagine the temple and what it meant to the Jews, no matter how many times I talk about the temple in my prayers each day – when being honest with myself it doesn’t mean much to me and if it were rebuilt, the thought of sacrificing animals to God seems quite idolatrous and archaic to me – so I guess my relation to Tisha B’av and the temples being destroyed are at the extreme end, yet I find solace in the day mostly because it allows me to reflect on all suffering, not just the ancient Jews, but our struggles through time – because being Jewish has always been a pretty shitty existence until recently – which doesn’t allow us to think in sufferings terms.

Ironically this Tisha B’av I actually felt the pain of mourning, sure I woke up at 11:30am and proceeded to lazy around bed for a few hours, but when I ventured outside into yet another beautiful day in San Jose, my boredom struck me with a frankness and I began my first real suffering on Tisha B’av. My suffering may have differed from yours – because no two people suffer the same. I suffered because although I had a full tank of gas, blue skies and endless adventures to do on my day off – I decided that those adventures will bring joy to me and decided to stay home instead. The suffering that I suffered was being held captive on this beautiful day and I sat reading the entire day. I refrained from much internet usage, didn’t go to the movies to pass the time and instead I read The Source by James Michener, a very fitting book for Tisha B’av.

Someone whom I respect very much once picked up a biography of James Michener that I was reading and casually said that The Source was the best book he had ever read about Israel and indeed sometime after that I picked up a copy, but being 1100 pages long it took me sometime until I actually looked at it and I guess the Lord steered me in its direction as no more a fitting time than the shabbos right before the nine days were to begin.

The Source is basically a historical albeit fictional account of Israel through the ages, in modern times the city of Makor is unearthed by archeologists and as they go through the levels of rubble, objects which are found are related to in stories. The book is one of the most fascinating books I have ever read and due to the fact that it’s my own history I have been brought to tears many times by the suffering that our people have gone through. The book literally takes the reader through the wars, the upheaval and the different groups and religions to come onto the land. It’s almost as if it’s taking into account the lives of unimportant individuals behind those mentioned in Tanach, it’s quite amazing to read about the people who built and died for the land of Israel, not just the Jews, but the Caananites, Hitites, Amalek, Moab, Greek, Roman and so on…I’m up to the point where Mark converts to Christianity.

So basically I’m getting into the nitty gritty of Jewish history and it’s not all that pleasant, but it’s totally understandable that most normal folks cannot relate to the original mounrings of Tisha B’av, but we have so much more to mourn than for ancient temples which we cannot relate to. We can mourn for the Holocaust victims, for the victims of Stalin, for the victims of terrorism around the world and for anything else that might bring to momentary tears.

Sure it’s over, but for me no matter how awesome life is, I never forget that in a second it could be all taken away and than we may have to mourn for our own affliction – so all I really wanted to say was that you all should shut up, stop complaining about how you don’t understand and maybe if you actually tried to find some meaning in the seemingly abstract purpose of Tisha B’av you would.

Find out more about Jewish mourning on 4torah.com