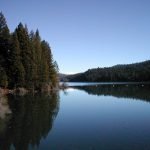 I went for a ride in the Sierra foothills today about an hour east of Sacramento, the ride was basically around a beautiful clear lake the entire time. As I snaked through the woods on this amazing super fast singletrack, I kept lusting after the water. All I wanted to do was to strip down and jump in the lake, but I refrained, despite the constant pressure and justifications that the Yetzer Harah kept giving me.

It kind of feels good to beat the yetzer harah, this entire week has been pretty tough on me. I’m not sure if any of you know what it’s like to pull out a freshly cooked pastrami from the smoker, or to get a whiff of some honey-thyme marinated turkey breast that is being sliced and just asking for a taste. Luckily, my fellow Mexican line cooks are understanding and have been providing me with a steady diet of fish and veggies, but watching fresh meats being pulled out of the smoker is quite hard to handle. I spent about 15 minutes in the walk-in huffing in some fresh lamb lamb bacon and imagine its juices dripping down my chin onto my chefs coat. It was painful, almost like that last hour of Yom Kippur when you start imagining all the things you are going to stuff your face with when you’re finished fasting.

I didn’t succumb to the temptations of my own cooking, but I felt my yetzer harah taking over my mind, I started to wonder if things cooked with meat would be fine, could I eat some veggies drizzled with reduced veal stock? Couldn’t I just eat chicken, surely chicken isn’t actually meat? What about chicken stock? My mind loves to figure out all of the justifications for things and although I’m usually pretty strong (except when it comes to pretty ladies) I usually make up counter justifications that go along the lines of “once you start justifying breaking rabbinical laws, then it’s a slippery slope” which is pretty much the orthodox argument against every leniency.

As I began my ride, I realized that I was wearing new gloves that I had purchased at REI yesterday, I decided that they were more of an accessory than clothing and that I had meant to buy them last week but forgot. The yetzer harah won the battle of the new gloves, but he most definitely lost the swimming battle, though he almost won. You see, I was riding this 10 mile loop around a beautiful lake, I figured that if I were swimming instead of a shower that would be fine right? Then I started wondering if swimming were just a made up thing, a conspiracy if you may – trying to get kids in camp to learn more Torah or something? Maybe swimming for pleasure was allowed, but not to bathe? The lake was so inviting, seriously, all around it was clear to 30 feet down or so and there were loads of private little inlets and cliffs to jump off. Then I started wondering if skinny dipping were cool because then it was like going to mikvah – of course the counter to that was the dams, two dams in fact proving it was a man made lake and wouldn’t necessarally be a kosher mikvah – would it?

Regardless, I decided that I would take one for the team and refrain from swimming and it felt pretty good to be kovesh my yetzer!

← Is going to start making videos again
The Fables of Schwartzie: Part 1 →