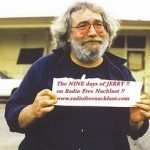 For those of you who haven’t read the Year of Living Biblically I would recommend doing so, AJ Jacobs writes about the year where he decided to live biblically, if it weren’t so comical you may mistake it for the Carrarite Manifesto or something, but sitting at my meal last night I started thinking about what would happen if someone decided to live the 8 days literally, they obviously couldn’t because most of the laws and customs surrounding this time of mourning are rabbinical, but nonetheless it could pose for an interesting study on trying to maintain the strictest halacha possible in a world that doesn’t stand much for someone who decides to forgo showers in the heat of summer.

Some less than perfect individuals like myself like to make up our own laws, like instead of forgoing music entirely (which I have never done – I have always taken the BS heter of non-live music as not really music to heart) during the 9 days, I will set my iPod to shuffle and let er’ rip, any music lover can tell you that listening to a diverse music collection non-stop on an iPod can drive any person insane, I simply don’t want to hear Megadeath, Modrechai Ben David and Thelonius Monk in a row ever – but that is what happens and while the music is sometimes great, the randomness reminds me that I’m supposed to be mourning all of the great calamities that befell the Jewish people during this time throughout history and currently as well.

So lets just say that you were to live the 9 days literally, this would mean that you couldn’t take a shower, listen to music of any sort, drink any wine, wear any laundered clothes or buy anything new as well, no shaving either – are women allowed to shave? I have no idea, I wonder of the 9 days halachos are mitzva she’zman grama’s and therefore women are exempt and can make their legs and armpits look nice for their hubbies.

Can one go to the mikvah? Then maybe they can bust out a shower beforehand – heter mikvah you know…

Oh and no meat, which seems to be the biggest deal of all for  most frum Jews, so much so that some restaurants in New York will have siyumim every night so people can take part in a loophole so they don’t have to actually mourn during the 9 days. Yes, the beis hamikdash was destroyed with a slew of other crappy things happening, but chas v’shalom we give up meat for a week.

87 comments for “Living the 9 days literally”