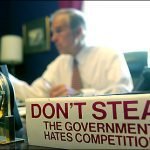 For the most part, frum Jews tend to be really honest people, but that honesty ends when it comes to the government. I used to work as an auditor for the State of New York in the summer, I would go with a team of inspectors to camps around the state to make sure that the food they were claiming to be feeding lower income children was claimed properly – naturally they would send me to a lot of Jewish camps and I got to see a lot of stuff. When ever I told anyone what I did they inevitably jump into some animated dialogue about how they would cheat the government and get more money – dozens of folks told me that when they were in camp, announcements in Yiddish would tell them to eat lunch and then return wearing different clothing to up the count.

If you ever want to start a good conversation with someone of the more heimishe variety, talk about government scam hock. Ever hear about the contractors in Lakewood who build section 8 houses for their own kids? Or the frum girls who become nurses and are then hired to be the nurse for their disabled sibling? What about going to the heimishe medicaid office where you don;t really need to prove who you are? The scams and dishonesty are easy to find when it comes to the government, don’t even get started on all the Florida and New Jersey cars you see in Brooklyn (insurance is cheaper in these places)

In high school we fulfilled our state requirement for physical education by walking up and down the stairs between the dorm and classrooms. I remember that the fire inspections were especially interesting, because one of the guys would make sure that all the smoke detectors had batteries prior to the inspector searching, then they would remove them and put them in the ones he hadn’t checked yet. I’m willing to bet that many frum folks have “home offices” which they write off and the inactive basement shul still counts as a tax write off for a place of worship.

Growing up in the frum community has conditioned me to be wary of the government, my father and others have drilled it into me that everyone hates the Jews, including the government. Whenever someone says that frummies cheat on their taxes, all I wonder is why anyone wouldn’t cheat on their taxes. I remember my first job that I ever had working on the books, it was for a Rabbi in Monsey and I was so shocked that he was honest -I told him that it was sad that it was shocking to me that someone frum was honest when it came to government affairs. So, unlike many of you, I’ve been conditioned to understand that frum Jews are just good at milking the system, finding loopholes and general shady business and this is all because of a deep ingrown fear of government authority which goes back thousands of years of death a destruction at the hand of the government.

I doubt that the frum community will ever hold of the government, but I don’t think it’s because they are dishonest, to me it goes much deeper than classic dishonesty. Although it can be tough working for Jews, most of my friends won’t do it – this is not because they will withhold your wages, but rather because they are sticklers for making the most out of their labor. Although I may get some flack for separating  government affairs from regular affairs, I think that the frum community reacts much differently to regular business dealings. Yes, we have bad apples, but it seems that there’s a general respect when it comes to matters that have no government attached to them.