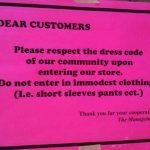 The modesty sign on one of the doors of one of the biggest Jewish supermarkets in the Chassidic-Hipster community of Williamsburg has been deemed immodest by the vaad hatznius which patrols the neighborhood looking for anything that may be deemed immodest. Typically the vaad hatznius focuses its efforts on the bike lanes which bring half naked men and women into their neighborhood on fixed gear bikes (another shonda if you ask any cyclist – kind of like driving a single speed car with no brakes), they also tend to deal with immodesty in the mostly modest behind the scenes fashion of arson, threatening phone calls and ex-communication decrees, but why are the bugging out over the small sign in front of this typical grocery store?

The store owner thinks that it;’s immodest because it’s acknowledging that anyone immodest may actually shop in the store which in turns creates an immodest environment, which is simply untrue. The dirty looks from the little kids sneering at a modernishe dressed lady will undoubtedly cause them to turn on their heels and go back to BOP or Flatbush and if that doesn’t get them, the spitting of the word goy may as well be offensive as comment.

I just think it’s because the sign is pink, but don’t those Chassidishe ladies wear pink turbans? Well maybe not hot pink…

← Off the derech photo album: Before and After
The Frum Satire underground →