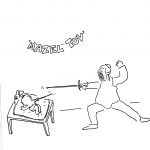 I never thought that the circumcision ban was a big deal until I had the pleasure of eating with two different peopl;e involved in the fight to have it removed from the ballot, both were passionate, both were very liberal and both acknowledged that this was an attack on our religion. Prior to these encounters, I merely shrugged off the super left wig crazy antics of San Francisco ballot measures and said you could just drive outside the 7 mile wide city and have a bris somewhere else – besides the two mohel’s in the Bay Area live in Sunnyvale and Berkeley and it would save on costs to go to them.

Naturally as an orthodox leaning Jew I was outraged and started ranting and raving about my disgust towards these people who wanted to infringe on our rights, but than something magical happened, you may call it my evil anti-Jewish side that creeped into my head and said “woa Heshman, wait a second – maybe it should be left up to the child whether or not he wants to be circumcized at age 18?” and all of a sudden I started having these wonderings of dissent towards both sides.

Now let me make this clear, I would never ever ever support or vote for a ban on circumcision, but I get it, I understand the thouhts behind the ban and they make sense. Archaic rituals like the bris seem pretty crazy and it would seem that allowing crazy rituals to be placed under freedom of religion opens the door to really twisted frum Muslims and their honor killings – imagine if those were made legal, or what about the female circumcision – life without a foreskin is one thing, but without a clitoris is a completely different story.

Apparently many of the supporters and backers of the ban are Gay Jews who are jealous of their foreskin rockin’ friends telling them how great it is to have the hood (can anyone confirm this?)the ladies don’t seem to like it much and many of my friends tell me they never even had the pleasure to know one. Regardless, the ban makes sense, from the outside – forced genital mutilation for religious purposes seems a bit cruel.

The good thing about the ban is that it has created a lot of interfaith achdus between Jewish groups and other religious groups like the Muslims. It has also brought together Jews from all walks of life to fight it together.

Find out more about Circumcision bans and brit milah at 4torah.com

184 comments for “The San Francisco Circumcision Ban: Not your typical view”