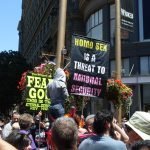 Someone sent me a real thoughtful message on Facebook trying to figure my opinions on the subject out and I asked if I could reprint our little conversation here. We may be beating a dead horse, but I’ve been kn own to beat a lot of dead horses in my day – hence the reason it gets the late night spot on the blog on this fine evening.

Hey, I just couldn’t help but comment on a post you made regarding the gay marriage law. To be honest, I’m surprised and rather disappointed by what either seems to be your support of the issue or your making light of an issue that is a truly tragic event for this country. I’ve been following some of your posts in general and have developed respect for you not only as a comedian, but a Jew who values the essence of Torah. Of course, I don’t know you well enough and it’s only been my impression thus far. That impression has been tarnished. A G-d fearing Jew, who believes that we received the Torah from Hashem at Sinai, should be ashamed of things like gay pride parades and gay marriage laws – which disgrace our G-d given Torah – while you seem to go as far as participating in those parades (based on what you wrote in one of your posts, I don’t know if you actually go to them or not).

I guess you didn’t read my Mesorah post, how do gay marriage laws legislated by a non-Jewish country go against the Torah?

Normally I wouldn’t meddle this way but I decided to write because you’re a person who has influence over the younger Jewish community and it’d be a shame if any young Jews out there would be influenced by something like this that you put out there. You are in a position where if you do something wrong, by identifying yourself as orthodox (which you write on your facebook page) you not only bring yourself down but you potentially bring others down with you.

Wrong in my book is probably much different from wrong in your book, for instance I think that a bunch of orthodox Jews dancing in a club with girls in a kiddush hashem because it shows that fundamentalist Jews can still have a good time and roll with the rest of em, but many frum folks would consider that a chilll Hashem.

I only hope that you will be able to relate to this message seriously and not turn it into a comedy show. I’m not trying to offend you, but rather address something I see as a very serious concern.

My original response on Facebook: Thanks for your email, you hit the nail on the head with exactly my point. Imagine for a moment that you’re a young frum gay dude,m struggling with whether or not you should try to stay frum, commit suicide or what have you and suddenly you read that some random frum dude (with a large following) says he went to a pride parade and supports gay marriage, yet remains committed as a Jew. I understand your viewpoint completely, but the main reason I am pro-choice, pro pornography, pro legal drug use and so on is because I would rather have a free for all than a Torah following country. I fear that if gay marriage could be struck down because people find it immoral, our freedoms can be taken away because people find it immoral., I don’t want it to be illegal for me and my unmarried girlfriend to get a hotel room together and so on. If your impression of me has been tarnished from this post, you haven’t been reading me long enough, this post is not the first nor will it be the last. Do I think gay folks who act on it are chayiv meesa? Yes, but then again who am I to judge, I have no idea what their madreigos are and no idea if my having sex told loshon horah is worse than their sins because of my madriega.

I’m not going to turn your email into a comedy hour, this is very serious matter, gays exist, they aren’t going away and I have a feeling the same discussions were happening during the civil rights movement which the modern orthodox and conservative movements took part in while the charedim seems to have tried to ignore it.

I appreciate your quick and serious reply to my message, thank you. First I’d like to make a point that I do not have anything against people who are gay and I’ll tell you why, being gay is not usually a choice and therefore I have no right to judge a person for it. But, the mistake people make, is that because it’s not a choice then it must be natural, and if it’s natural then it’s something that must be accepted, and if it’s something that needs to be accepted then what better way to do it than throw a parade. Being gay is not natural, it’s a form of yetzer hara, just like people who struggle with anger issues, with eating disorders, and more. When was the last time you saw an anger parade? Or an eating disorder parade? The difference is that eating disorders can cause severe health issues, therefore it doesnt take much logic to figure out that it’s wrong and shouldn’t be made socially acceptable. With anger, anger can cause a person to do a lot of damage in the world, as such, people realize that anger is something that needs to be controlled. Homosexuality on the other hand, seemingly, doesn’t hurt anyone. On the contrary, a person who suppresses their sexual needs may potentially hurt themselves psychologically and as a result worse. Being that our generation is distant from religion, it becomes easy to justify homosexuality.

You might be surprised to find out that I don’t believe that every person who is gay, and who acts on their desires, is not necessarily doomed to gehinom. We all have our own yetzer to deal with, and none of us are perfect in standing up to it. At times, we fall, even those of us who are at spiritually high levels fall, all the more so those who are lost and confused. It’s one thing if a person cannot overcome their yetzer (while making an effort to do so), it’s another if a person accepts their yetzer as part of who they are and tries to make society accept it as well. Judaism does not prohibit feeling homosexual feelings because they are not within our control, Judaism prohibits acting on it, acting is within our control. Gay pride parades and gay marriage encourage people to act on it, in other words, encourge people to trangress a serious Torah transgression.

I think it’s wonderful how you’re trying to reach out to people who face these problems and make them feel connected to Judaism to some extent, however, I just dont think you’re going about it the right way by attending these parades and expressing support for the cause. The right way should be to reach out to these individuals in other ways, first and foremost, to help them understand what it is they are dealing with, secondly, making them realize that no matter what they feel, and even if they act on it in private, we, as their brothers and sisters are there for them and will not turn them away because of their struggles. Trying to force them to change will almost certainly not work, on the other hand, teaching them and inspiring them and making them feel welcome regardless of their struggles may at some point help them overcome their yetzer. Making them realize that because their yezter is so difficult to overcome shows how high their potential is, which down the road can help motivate them to seek out that potential – a process which in itself will help them with their struggle.

In all honesty I don’t think it’s possible for someone to overcome a yetzer for love and the basic human need of sex. I received another message on facebook from someone who told me he doesn’t believe in the Torah for this reason and I completely understand. Gay pride parades have nothing to do with encouraging people to act on it, they have to with people who have forever been ostracized by family, friends and community to come out and have a big part, the straight community flaunts their straightness all the time – it;s just accepted so we don’t have the same reactions that we do to pride parades. When you have to spend your life in the closet it’s a painful ordeal, so when you can finally leave and have community the natural tendency is to go a bit overboard. I don’t attend pride parades to show my support necessarily, I go because they are a lot more fun than the memorial day parades and there are always hot naked chicks (probably dudes, but they appear like girls) to look at.

← Sort of off the derech and looking for a shidduch
What’s the strangest butt-dial you’ve ever received? →

183 comments for “Dear Heshy: How could you be frum and support gay marriage?”