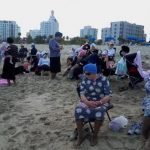 I was at work a few weeks ago and I noticed one of my friends eating so I went to say hi, he had with him a possible employee for the community kollel here and I guess he was showing him around. I’m not sure exactly what would sell a really frum person on living in the Bay Area, I’m pretty sure the million dollar 3 bedroom homes, $20,000 day school tuition and 1 decent kosher restaurant are not exactly selling points, but alas everyone who visits the Bay must eat at the Kitchen Table and here was this guy showing a potential employee what we have to offer. I played a small game of Jewish Geography and the way he said “I’ve been in eretz yisroel for the last 9 years” struck me as too frum. Why it struck me as too frum is too hard to explain, but someone who speaks like that doesn’t exactly seem to me like the type of guy who’s going to give classes to reform lesbians about the halachic basis to use marijuana for besamin at havdalah.

There are many ways to sound frummer than you already are, or give away that your secular looking self was once a black hat, peyos behind the ears frummy. In general pronouncing things with a suf rather than a tuf will score you brownie points with the frummies, but there are some words which 90% of the population happens to pronounce with a tuf. Two famous examples of this are The Kotel and Tzfat. If you really want to sound frummer, a sure fire way to do this is to say something like – when I was in eretz yisroel I used to daven netz at the Koisel. Merely saying the Kosel, is ok, but if you’re already rocking it Kosel style – you might as well add the oy into Koisel.

The following are a list of substittions that will male you sound frummer than you are, if you already use these words, than you either grew up yeshivish/chassidish/heimishe or are a better faker than I am.

Death, died or passed away: Nifter is the supreme substitute, if you want to be a bit more moderishe, but not really too unfrum you should use passed away – but always follow it up with zecher tzadik lebracha, ava-shalom or of blessed memory if you want to sound conservative.

Wedding: Never say wedding – it sounds so modern orthodox – always say chasanah and if you could try to pronounce it Chasi-nah, rather than the traditional chasanah.

How are you doing: The correct response is always to insert Baruch Hashem before whatever you want to say – so if your dog (obviously a BT because frummies are afraid of dogs because it’s a mesorah from the shtetl that the goyim had dogs during the progroms) died and someone says “nu, shmuely, vus mach-du” the correct response would be, “Baruch Hashem my dog was just nifter” and so on.

The frummest way to say “sure”: When saying “sure I can do that for you” frummies tend to say 100%, but usually they say it with their heads down, shoulders slumped (the same way they say gut shabbos to you) multiple times like “hey can you pick me up from the airport?” 100%, 100%.

Friends: Your friends are no longer your friends, homeboys or crew – they are now called your chevra.

Kiddush Cup: Call it a becher from now on.

Gays: Of you ever talk about the gays at all, you have to throw in words like “toevah” and be sure to spit when you say it.

Meal: No longer is any meal just a meal, now you should call it seuda. Shabbos Meal becomes shabbos seuda.