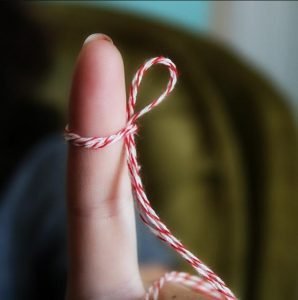 At the conclusion of this week’s parsha, we find the third and final paragraph of the Shema Yisroel prayer, and although Jews are bidden to recite it twice daily, like most prayers, unfortunately, the tendency is to say it without as much intention as one ought to apply — perhaps you’ll enjoy this particular insight.

The parsha ends with the commandment to make tzitzis (v’asu lahem tzitzis) and the next verse seemingly comes to explain the purpose of the tzitzis (Number 15:39):

This reminds me of when I was a little kid and I first heard about the idea of tying a string around one’s finger so as not to forget something important.  My question was always, “how do you remember what the thing was that you were supposed to remember, because the string is so generic?  Won’t you need a string around another finger to remind you to remember what it was that the first string was there to remind you of?”

The Torah is not telling us that the strings (and the techeiles string in particular) will actually remind us of anything independent of our own concern for the commandment of tzitzis.  Rather, the Torah is instructing us to remember — that’s a part of the directive, rather than a natural outgrowth of tzitzis possession.  Even though one is very likely in complete fulfillment despite not remembering any other commandments, the Torah tells us that we are to think of the tzitzis as a constant visual cue to the rest of our obligations.

And wouldn’t you know…it’s not just a single string.  There’s so many strings, and Chazal suggested that we make 5 knots (instead of only the biblically required 2) so that we may construct mnemonics about how the number of strings and knots added to the numerical value of the word serves to remind us of all the purported 613 commandments, despite the gematria not working out because the word is spelled deficiently (with only one yud), because it’s a bacronym mnemonic and all we’re interested in is if it can serve as a reminder. (Mizrachi on Rashi, Numbers 15:39)  ‘Old people from Texas eat spiders’ doesn’t make any sense, but as long as people can remember it, that’s all that counts.  We are told of a man who lived at  the time of the siege of Jerusalem, and the Talmud recounts how he was given a special name because he was so meticulous in caring for his tzitzis, representative of the entire Torah (Bavli Gittin 56a)  We are instructed to conjure up images of a high-end prostitute seeking out her would-be client in the holy beis medrash in order to solve the mystery of her would-be suitor’s ‘strings of remembrance’ that swatted him in the face (Bavli Menachos 44a)

We are the ones who need to give the tzitzis its power to guide our thoughts, and let’s make sure we remember to do so…

← The Latest Jewish News on TV
Have you seen the Chassidish South Park? Funny or offensive? →