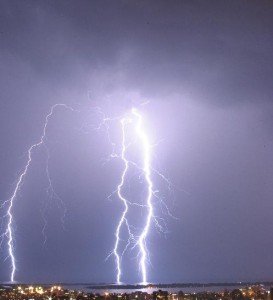 Shavuos commemorates the divine national revelation at Sinai and the receiving of the Torah by the Israelites from God in 1312 BCE.

We are told (Exodus 20:15) that accompanying the festivities of the day was a spectacular audio-visual display that included not only smoke and apparent shofar blasts (see last week’s post), but the verse attests to something else as well: “v’chol ha’am ro’im es hakolos v’es halapidim.”  Ibn Ezra, among others, translates this phrase euphemistically — the entire nation perceived and experienced the thunder and lightening.  Rashi, the preeminent biblical commentator, takes a different approach, quoting the Talmud (Bavli Shabbos 88b) that the word ro’im is to be translated in a literal fashion, for a translation of, “the entire nation saw the thunder and lightening.”

Accordingly, the nation saw the thunder and the lightening.  To put it simply, lightening is the discharge of built-up electrostatic energy and thunder is the sound produced by lightening.  In a sense, the visual observation of thunder is called lightening — and this is the basis for the term thunderbolt, which serves to describe a bolt of lightening along with its accompanying thunderclap.  So to say that the Israelites at Sinai saw thunder is meaningless (unless it means to say that they saw the lightening); it’s sort of like saying that they heard mint chocolate chip ice cream — you just can’t do that.

So what are we to do with this?  How can we take something meaningful from the midrash and not glance at the rabbi with disdain when he speaks about the Israelites even seeing the thunder at the revelation on Sinai?

After dating lots of girls, Mark met Jessica, and after a while, he asks his friend Sam how he’s supposed to know whether Jessica is the girl for him.  Sam responds, “Mark, if you’re really in love with Jessica, you’ll feel like you’ve never felt before.  You’ll be thinking of ways to surprise her and make her smile and you might not be able to think of anything else when you’re with her and it’ll be just totally Wow!  Your feelings for her will be so intense that you not only feel the love, but you’ll be able to taste it and hear it as well!”

Now, of course that doesn’t make any sense, really…but it makes a lot of sense to Mark.  Sam is saying that the intensity of the emotions will be so great that they will confuse the senses and overwhelm him completely.  So perhaps we can say that that is what the midrash is trying to tell us.  The revelation at Sinai was of such amazing proportions that it felt like nothing made any sense anymore — it was like we were hearing sights and seeing sounds and it was just totally WOW!!

At Sinai, we were like the team that could taste victory.  Chazal wanted to express how amazingly unique and utterly stupendous the moment was, so they chose to amplify and magnify the events by stating, “Man, it was so amazing…you could see the thunder!”

← You say you’re conservative, but you’re pretty frum!
Foreskin Man vs. The Thing →