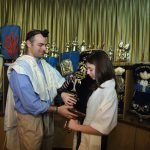 Like most folks who grew up in a frum environment I had very little exposure to other non-“orthodox” streams of Judaism. The entire extended family on my fathers side is frum all the way back, so I never had any conservative or reform bar mitzvah’s that we had to deal with – I say deal with because whenever someone frum has a non-orthodox event to go to they make a whole fuss about how yopu can’t go into a conservative or a reform shul – but that they got a heter to attend to the kiddush. So until moving to from Rochester to Albany I never had much close contact to other non-orthodox Jews. Sure, I saw them on line at H and H Bagels after Yom Kippur and occasionally at Jewish events, but I never really entered their homes and got to examine them up close, they were as foreign to me as Chassidim and Catholics.

Through blogging I have been meeting more and more non-observant Jews, you may or may not be surprised that almost 40% of the folks reading Frum Satire do not identify as orthodox, of course I have noticed that non-observant Jews are really into the movement they are affiliated with and it’s not so much about what your actual hashkafa may be. For instance, last year some fans of mine hosted me in Los Angeles for a week and they are staunch conservatives, but for me it was the first time I met a frum conservative. The man of the house wore his yarmulke and tzitzis everywhere including work, davened every day and kept a fully kosher home, I was totally surprised for I have been taught my whole life that conservative Judaism isn’t really Judaism, yet here I am meeting Jews who seem to be following everythingb that I follow except she wears a talis on shabbos and there’s no mechitza – big deal.

So imagine my shock when I walked into the kitchen of Congregation Beth Shalom in San Francisco this past Thursday to discover only glatt kosher meat and a big sign telling me that the Luchos (tablet) K was not allowed in the kitchen. I was hired by 12 Tribes Kosher Food to help with a catering event over the weekend and my experience has kind of changed my views on kasharus trust and how we eat. Not only was all the meat organic and free range, it was all glatt and has to be. The veggies are checked for bugs and a quick glance in all the fridges revealed that no shady hechsherim were allowed in the kitchen, but this is a conservative shul I proclaimed in my head – sure enough the bathrooms had electronic sinks and urinals so at least they do something wrong – but their kitchen was fully kosher and I would eat the food made by 12 Tribes.

It seems that conservative and reform Judaism is going through a baal teshuva stage, like the younger generation is kind of looking at their parents who identify as Jews but do absolutely nothing besides bar mitrzvah or confirmation and temple on high holidays and it seems as if the younger crowd wants more. You have this generation of people who want to be individuals and retain their culture and I think this drives a lot of people to make choices like the person who told me recently that they feel living in a community is important and having to drive to shul on shabbos means you aren’t really in a community.

In most conservative homes I have been in you really couldn’t differentiate between that an orthodox home, they had the seforim, no TV, Marc Chagal print, some figurines of dancing chassidim and a case of cherry wood and silver kiddush products. For many conservatives I think it’s more about affiliation and although by many of our standards, standards that I grew up with and were taught by school and family many conservatives would in fact be considered orthodox – I think there’s a general state of ignorance in the frum community about other sects of Jews who don’t claim to be practicing authentic Judaism – which orthodoxy is most definitely not – who knows what’s authentic. I’m beginning the think the mesorah is akin to a game of telephone which lasts for 3000 years in which case we don’t exactly know if everyone was smoking some serious stuff at Sinai or it actually happened as it literally states in the Torah.

162 comments for “You say you’re conservative, but you’re pretty frum!”