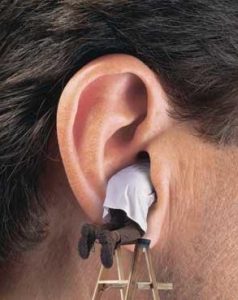 This week’s parsha concludes with a statement about Moses’ communicatory habits with God — apparently, after the construction (or at least the dedication) of the Tabernacle, the vast majority of communication would occur only at the Tabernacle. Rashi explains an apparent contradiction in statements by asserting that the voice of God emanated from between the cherubim/atop the ark cover within the Kodesh Kedoshim (“Holy of Holies”) to the Kodesh (“Holies”) and that Moses stood within this latter space.  The voice, however, did not exit the Tabernacle.  But if Moses didn’t enter the Kodesh Kedoshim, how can the Torah state from where it emanated?  So perhaps we can explain the presence of such information as being supplied by the omniscient narrator — literally.

What was this voice?  God has no larynx — he possesses no arytenoid cartilages, no trachea and no vocal folds.  Not only that, but He doesn’t breath and he also doesn’t have a body.  So, if there’s a God and he’s the God of Moses, there’s no doubt that he can speak to Moses, but even saying that displays our human inclination.  When we say that there was a voice, it’s written in a fashion– b’lashon bnei adam (“in the language of men”) — that we can understand, but it’s not meant to be taken literally.  God’s voice is entirely unlike what we consider to be a voice, but it’s the closest thing we can think of to describe it to say that Moses received information from God because and that’s one way in which we spread information among humans.

Rashi explains that the voice did not leave the Tabernacle, commenting that Aaron was excluded from the communication.  Was that because Aaron wasn’t there, or because, even had he been there, he would not have heard anything?  Seeing how God’s voice is not really a voice at all, perhaps it was all in Moses’ head — not to say that he was insane and/or fabricating these incidents, but rather, if God’s voice is really not a voice at all and only Moses was privy to receiving said communication, in what sense do we say that there was actually a voice (that could theoretically be heard by all), but it was just that no one else was present, versus saying that Moses heard a voice, in that his neurosensory apparatus sensed something although there were no oscillations of air pressure beating against his tympanic membrane?

What’s the nafka mina (practical ramification), one might ask?  Well, had Aaron or someone else stole into the Tabernacle during the divine communication, would he or the other heard anything?  Had Moses been wearing a wire, would it have picked up anything?  Could a prophet be deaf?

← Why Is Britain’s Prime Minister Pulling Out of JNF? And Will There Be A Palestinian State This Year?
You say you’re conservative, but you’re pretty frum! →