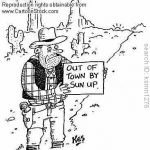 I never started hearing the term “out of town” until I started going to yeshiva, people referred to my yeshiva as out of town and I always wondered if they realized that we were in the middle of a metropolitan area with 800,000 people or so, it didn’t seem too out of town to be going to yeshiva in the same town as Kodak and Xerox were headquartered in did it. Then later in life I learned that out of town basically meant anywhere outside of “frum NY” I wasn’t yet to learn that out of town had a much deeper meaning than random geographical boundaries, that it actually meant a look, attitude, hashkafa and so on.

Frum dating sites typically ask you what your hashkafa means to you, reading “what modern orthodox machmir means to you” from dozens of profiles will quickly help you understand why no label is good enough for a large group of people. I have read such a difference of opinions from girls on what their hashkafic label means to them – that I am hesitant to just date girls based on what hashkafic box they decided to click on their profiles and since no one – not even the OU or Agudah has ever created an official hashkafic guidelines I am liable to thin k there is none. This leads in to the term out of town, everyone has a different way of using the term. Originally the term was used solely by yeshivish and folks of frummier tendencies to describe try and convince you to go out with Brooklyn girls who are more “out of towny” which they always said was more “open minded” which made me wonder why anyone would want to date a closed minded girl (until I started hearing about higher spiritual levels and staying in the kitchen all day)

When it comes to people using the term to describe a place, they typically use it as a negative connotation. It means that since they are far away from the Torah centers of New York and Lakewood, they simply aren’t as frum and possibly more modern (modern is always a negative connotation when used by frummies – it means lax in halacha in many circles – of course some of those circles think God cares what type of black hat you wear) Geographical out of town status gets complex when people start mixing attitude and location together. I read an article a little while back about how Cedarhurst had an out of town feel, that’s not say that this Long Island death trap that has been invaded by very in-town Brooklynites is actually out of town, but that it feels like out of town – maybe people say good shabbos to you on the street, or there are trees and other foreign objects like cleanliness.

People have told me that Monsey is out of town, I have no idea how they came up with this, but that’s the general problem with having no rules and regulations regarding categories in the frum community. No one exactly knows what yeshivish modern is either, but a shit ton of people use the term to describe people. Many people will say a place is “too out of town” for them – this typically means there aren’t enough pizza or sushi places, or that the shul accommodates too much diversity and they want a homogenius community – kind of like you can find in Monsey.

One of the biggest problems with classifying people as “out of town” types is that they typically adopt the New York attitude soon after moving there. Since every single over the age of 25 feels they need to be in NY in order to get married or stay single in comfort, those singles tend to become New Yorkers – despite their assurance to friends and family that they wont. So whenever a friend of mine dates a supposed “out of towner” who lives in the Heights or on the UWS – I always tell them to make sure they haven’t been in NY long enough to adopt its soul and heart damaging ways.

I have always thought that Out Of Town status should really only be given to places that are really off the beaten track. So places like Baltimore or Boston wouldn’t really gain entry – they have large communities, multiple school options and lots of kosher places to eat, but places like Denver, Portland or even San Francisco should definitely be given that status since they are very far distances from the next frum community, have hardly any restaurants and no real yeshiva options.

The problem with Out Of Town is that it is used to describe so many things that the term has become misused. If someone meets a dude who is from Brooklyn and doesn’t have said “Brooklyn” attitude they label him as out of town and that sucks.

What does out of town mean to you?

← Unconsummated Marriage
Where is the Achdus? →

42 comments for “What does out of town mean to you?”