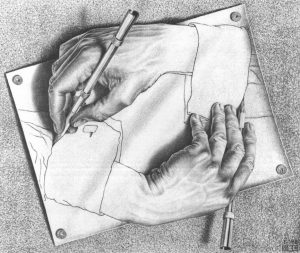 A few weeks ago, I discussed the Torah’s exclusion of those with particular physical deformities from Temple service, proposing the notion that the divine approach to humans (via the Torah) can be explained as sometimes conforming to one of idealism, and other times to one of realism.

Certainly, the go-to approach of biblcal analysis is that it is generally didactic, in that God uses it to instruct the Israelites (and the Jewish people, as their descendants) how they should ideally approach the world — in plainer terms, how to think and what to do:

These are examples of the Torah instructing us from on high, informing us of what it maintains as truths of the universe — and it does so seemingly irrespective of human psychology or emotion.

But there are also many instances of the Torah being mimetic, in that commandments or divine actions exhibit not what appears to be an independent, extrinsic cause, but rather, they seem to be the effect of human psychology and/or emotion.  In this way, the Torah is more than a book of law — it is also a book of mortal interaction with the divine, and examples abound; that God would prohibit any action performed by idolaters as their normal way of worship, despite that not being a form of Temple worship (Bavli Sandrin 62a) — that is wholly responsive to the human condition.  That God would permit Israel to send spies to the Promised Land (Numbers 13) or choose a king (Deuteronomy 17) is entirely reactive — yet the latter is counted among the biblical commandments, and it is nothing short of fascinating.  Lord Rabbi Jonathan Sacks explains the biblical approbation of slavery as providing us with free will to choose a higher road, but that seems like a contrivance in hindsight — the Torah bans so many things that it’s hardly defensible to assert such a thing and be able to maintain one’s intellectual integrity.  Others explain it in a more mimetic fashion, asserting that the social climate of 1312 BCE necessitated the halachic permissibility of slavery.

When the Torah prohibits humans and animals with physical deformities from serving as Temple priests or from being given as offerings, respectively, we see Chazal interpret the latter (and my post extended that to the former) as an example of biblical mimeticism — the Torah was not instructing us on how to think as much as it was responding to the way in which we already think.

Last week’s parsha included the topic of valuation gifts to the Temple; the valuations are oddly set by demographics and not by individual value as dictated by, say, the slave market economy.  A man aged 20 to 60 is valued at 50 shekel, whether he’s a blind one-armed bandit or a polymath bodybuilder statesman, and a woman of similar age is 30 shekel.

Now one may question what this entire concept is at all — this valuation is completely meaningless and nonsensical, save for it being mentioned in the Torah, and no one would ever have thought to value people like this!  In what sense is the blind one-armed bandit and the polymath bodybuilder statesman equivalent?  And in what way is a female 3/5 of that valuation?

Moreover, why do these valuations even exist?  Who is going to think of donating to the Temple treasury by valuating themselves or their family members in a way that no one can understand and that no one would have ever thought of doing until the Torah suggested it?  And as for my chief reason in bringing this up — was the Torah being didactic in informing us that females are 3/5 the value of males, but only up until the age of 60, at which point females are then 2/3 the value of males?  This entire section of the Torah, which is apparently completely unnecessary (because this seemingly arbitrary valuation doesn’t exist save for it being in the Torah and there are many other avenues to donate to the Temple) smacks of agism and sexism and the question is: is the Torah providing this as a function of idealism, in that we ought to approach the world in this way (that women and the elderly are worth less than young males) or as a function of realism, in that the world already does value women and the elderly as worth less, and it’s just playing along?  Mimah nafshach (either way), it seems troubling, for we look to the Torah for guidance, and whether the Torah is guiding us to think less of women and the elderly or it takes the stance of not attempting to dispel these misconceptions, we ought to wonder about the underlying message.

Which brings us to this week’s parsha, the start of the fourth Book of Moses.  Only men from 20 years and up are counted in the ranks, and one may ask why that is so.  Are women too dainty for war, or are they a distraction for the men, or are they less effective in battle, or a combination of two, or all three, or something else?  And there is no cutoff here for the elderly, so it seems that although they are too old to be worth 50 shekel, they are not too old to do battle.

But I am most interested in the idea of the priestly nature of the tribe of Levi.  The concept of a caste system is certainly not unique to Judaism, and so we may ask: is the Torah being didactic in dictating a distinction or mimetic in allowing for a distinction?

God informs Moses (Numbers 3:11-13) that the first-born among the Israelites are holy because the Egyptian first-borns were wiped out in the tenth plague, and, as a result, God proclaims that “all first-borns among the nation and the animals belong to me.”  What exactly this parallel is meant to accomplish is unclear — there is no similar parallel drawn to the drinking water of the Israelites because it was spared while the Egyptian water was struck by the first plague or the crops of the Israelites because they were spared from the hail and locusts.  And is this unique quality bestowed upon the first-born really because of the tenth plague?  Do we not see the first-born being treated more favorably even prior to Egypt?

Esau was the first born but Jacob tricked Isaac into giving him the blessing — how can that be?  If the first-born is special, then why does it matter to whom the blessing was given?  Perhaps, then, the first-born has no inherent special quality, and it’s merely that, under normal circumstances, it is to him that the blessing is given (which is what effects the uniqueness), but since it was given to Jacob, he became the special son.  Either way, we can learn from here that the first-born was already given a special status before Egypt.

Deuteronomy 21:17 teaches that the first-born receives a double portion of the inheritance…why would that be so?  Is the first-born special de jure or is it just that the first-born is de facto special because he is often more ready and able than his younger siblings?   When the Israelites (and many others) lived in a tribal society, with family clans being an important part of every day life, the man of the family dominated in the male-dominant societies and, if he were to die or disappear, likely the oldest son would take his place.  The line of succession must be established before on needs to invoke it, or we end up with an awkward juggling of the leadership position that ought not be tolerated.  Such a thing leads to considerable loss of valuble time, energy and resources — just look at Satmer and Bobov.  In the family clan of tribal society, perhaps the first-born is charged with the greatest responsibility, so perhaps that’s why he was bestowed with the greatest share of the inheritance.  But if the first-born is a female, the responsibility in a male-dominant society would fall upon the first born of the sons, even though that son does not receive a double portion — is there then a different rationale behind the double portion?  Either way, is the insistence on the uniqueness of the bechor (first-born son) didactic or mimetic?

Forgive me for the first-born digression; I’ll now return to the Jewish caste system.  One must be able to approach the issue not from a 2011 CE perspective but from a 1312 BCE perspective.  Some may look at the kohein today with an odd sort of reverence — he receives the first spot in the Torah reading line-up and even gets a double-whammy in case there is no Levite.  He receives first dibs on leading the grace after meals and can’t attend general funerals.  But this is all ancillary to the real distinction between priest and non-priest — we just don’t have a Temple to sense the true disparity.  When there was a Temple, the priests (and the Levites) were allegedly very poor, having no estate claims, and were forced to live off alms.  And they don’t redeem their first-born sons — because the first-borns were selected to serve God as a special class of citizens, but that was undone and the special status was transferred to the tribe of Levi, apparently as a result of their lack of participation in the golden calf — that is seemingly very responsive to the human action.

To conclude, my aim was merely to expose this dualism between didacticism and mimeticism — although we can appreciate the overwhelming mimeticism of rabbinical ordinances, it is the didactic nature of the biblical law that dominates in our minds, but a closer look reveals that this may not be the case.   Perhaps, similar to how one may suggest that all commandments are chukim, one may similarly suggest that the Torah is entirely mimetic, for in some sense, the Torah can be seen as entirely reactive to us as humans — had we been sentient gastropods, we could not be expected to wear tefillin, and not just because we’d be hermaphrodites.

There are those who assert, based on a verse that appears multiple times in Tanach (Psalms 105:8, Chronicles 1 16:15), that the Torah preceded the world by 974 generations — (if “The Word” was given to the 1000th generation and Moses was 26 generations from Adam, that’s 974 generations prior to Adam that “The Word” was extant) — but notwithstanding the exact calculation, this position meshes very nicely with the Akivan approach that God peered into the Torah and build the world from it (Genesis Rabbah 1:4, and also the Zohar’s famous istakeil ba b’oraisa u’bara alma), effectively using it as the blueprint.  On the contrary, if the Torah presents so many examples of mimeticism, perhaps one can say that God was istakeil b’alma u’bara oraisa — that God was cognizant of his world when he wrote the Torah.  Our challenge, then, is to take the ancient Torah that was based on a world that no longer exists and apply it — in toto — to ourselves in 2011.