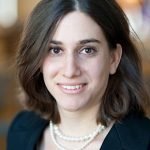 “I wanted to lead a halachically observant community so decided it was best to transfer to JTS where it would be far more likely I’d be working at a congregation that kept kosher, was more Shabbat observant and had more davenning with traditional nusach — things I grew up with that were part of my personal practice,” said Rachel Isaacs who on May 19th became the first openly gay frum female rabbi to be ordained by the JTS.

Up until 5 years ago the JTS was following a more traditional, some may say Haredi interpretation of the Torah, but after 20 years of debate they decided that they would become more modern orthodox-esque and allow gay clergy to be ordained.

Not only is Rachel Isaacs the first openly gay frum female rabbit be ordained by the JTS, but she’s a super hottie and he hair looks like a sheitle. Go take a gander at the women rabbis on google images, they aren’t much to look at – such a shame that the one hottie has to play for the other team.