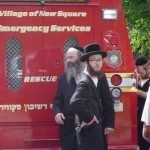 Actually the Skverer Rebbe’s butler did it with an incendiary device and a container of gasoline on someone’s porch, but nevertheless this is the worst case of shul politics I’ve ever seen. San Jose even has a failed breakaway minyan that is still there despite the fact they rarely get a minyan and the reason they broke away is long gone, but if I decide to go there I could pretty much guarantee that no one, not even my Rabbis butler would try to burn my house down while my family slept.

Normally I would say that there’s no way the Helige Skever Rebbe (whom I have visited in the past for brachos with my father) would be responsible for telling his butler to burn a families house down, but unfortunately I don’t have much faith in the Chassidic leaders anymore.

So the guy decided to leave your shul, but still live in the community, big deal. You don’t need to kill the guy, do you? Then again, this guy probably knew it was coming considering the fact he was watching his back porch surveillance camera, who the hell has surveillance on their house – unless they knew someone was out to get them.

Now what on earth is the Rebbe doing with a butler, I know the Lubavitcher Rebbe had several secretaries, but a butler? Does he have that extensive of a wine collection, maids and cooks too? I wonder what his wine cellar looks like. Maybe that’s where he keeps his selection of flame throwers and other incendiary devices for those that go to a different shul than he mandates. I really hope that the Skverer Rebbe had nothing to do with this and it was just a dumb kids idea of how to solve a classic case of (the shul I live near is the one I don’t go to) or else some shit will hit the fan.

There is an official rule from the founding Skver Rabbi that everyone should Daven in the Main Beis Medresh. A few years ago a Minyan was started in Friedwald Nursinghome, OUTSIDE the community – which is according to the rule. The community decided that this is a threat (meaning ppl would start going there), so they made a new law, that Davening in this place is forbidden. When the participants didn’t obey, they started all kinds of terror tactics to get them to obey. Happenes to be that this attempt to burn down this house did not workout. You can rest assured that if it would workout well, and the house would be down in ashes the community leaders wouldn’t even blink – if nobody would be caught. In the past there were windows shattered and tires flattened on a regular basis. I hope this will serve as a wakeup call. The problem here is, that politicians turn a blind eye because they love the block-vote the Skver provides every time.