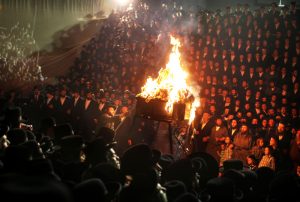 Ultra-Orthodox Jewish men and boys dance around a fire during celebrations of the holiday Lag Baomer in the Mea Shearim neighborhood of Jerusalem, Monday, May 11, 2009. Israelis light bonfires during Lag Ba’Omer celebrations to commemorate the end of a plague said to have decimated Jews in Roman times. (AP Photo/Oded Balilty)