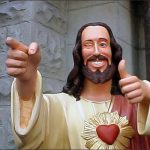 I was debating writing a whole satirical piece on how Jesus saved me during the Rapture (every 20 years or so some loony Christian nuts decide the world is going to end and they need a Yom Kippur to cleanse the world of non-believers) and pre-scheduling the post for shabbos morning to prove that my holy day was now Sunday and Saturday was turned into a day when I ate brunch, visited flea markets and searched for deals at Crate and Barrel – but alas I decided that it was too much of a moris ayin and that not everyone was fully aware that judgment day was here and I would get all these angry emails about how I wasn’t frum anymore – and I just didn’t want to deal with that.

So I started hearing about the rapture last week, but I honestly thought it was a new movie or video game coming out on May 21st. So many people were talking about it, that I had to see for myself what the big deal was – kind of like the first time I watched Half Baked (apparently I didn’t “get” it because I wasn’t a pot smoker at the time) well Rapture isn’t a movie, it’s actually a day the occurs every 20 years or so – the last time being in 1994 and it’s the day when Jesus is supposed to rise up and save us all.

What exactly Jesus is going save us from is unclear, did he save you today?

I really was hoping for something cool to happen today. It kind of reminded me during the whole Y2K fiasco. We were in yeshiva sitting on the roof of the dorm when the clock struck midnight on January 1st 2000 and I swear we were all waiting for the world to end – but nothing happened. I could use a little craziness in life, I’ve seen enough zombie movies to know  would rather death and destruction through natural disaster or nuclear holocaust – I’d rather just be gone than eaten by monsters and living a life of midnight eternity.

I’m waiting for the frum rapture…but Lag Baomer is just as cool with me.

38 comments for “Did Jesus save you today?”