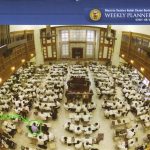 Contrary to what many of you may think, I learned a lot in yeshiva, I didn’t learn much Torah, but there was lots of useful stuff that I learned in yeshiva that I probably wouldn’t have learned in a normal Jewish school.

How to get shabbos meals: As was determined by last weeks post, getting a shabbos invite is not that obvious to most non-yeshiva attending folks. Some suckers actually wait around for years to be invited out, but any yeshiva guy with a little gall, some charm and people skills can around the fact that most married folks don’t remember those starving single guys when it comes to inviting people to their homes for lunch. I learned that you have to actually ask and the best invites were from the people who would turn you down half the time – because they were comfortable enough with telling you that they didn’t feel like having you one week.

How to use a George Foreman Grill: Yeshiva guys do not cook, they grill, whether they use a George Foreman or an iron, they find a way to get the job done without actually doing anything and they rarely clean up the leftover fat. I learned that God’s gift to single men was the George Foreman grill (later in lifer I realized it was pasta and tofu)

An appreciation for heavy metal: I’m not sure how it happened, but yeshiva turned me on to 80’s metal, progressive metal and finally power metal. How Poison, Dream Theater and Hammerfall all became yeshivish bands I have no idea, but after a stressful day of dodging Rabbis and shiur – it was nice to unwind with a little heavy metal. I also learned to do a mean air guitar in yeshiva as well.

How to pass drug tests: I never actually smoked pot until I was in my late 20’s, but being in a yeshiva full of druggies taught me a lot about passing drug tests, although I was always the guy who looked like a stoner – thank God the Rabbis never even tested me (I requested a can of Mt Dew to help me – should the time arrive) for I am super bladder shy and wouldn;t have ever been able to pee in front of the Rabbis. Anyway, apparently Cranberry juice was a big hit with the druggie crowd, as well as visine and some sort of hippie vitamin C detox drink that probably wasn’t kosher – but I guess it was better than being thrown out of yeshiva and forced off the derech.

How to hock: There’s nothing better than knowing everyone and always saying you can hook whoever you are talking to – up with someone who can get the job done. I learned how to hock and how to talk in a rude Brooklyn yeshiva manner that basically says nothing, but claims everything – I can fake hocker should the need arise.

How to shuckel for all occasions: There is the modern orthodox shuckel, the violent “why me God” shuckel and the neila slow nervous shuckel. Yeshiva allowed for a lot of visuals and practice according to different Rabbis shuckeling styles.

How to sleep through shachris: Usually the Vecker (wacker upper guy) would put on some terrible sphardi music at 7:15 in the morning, 10 minutes later he would slam your door open and scream at you. Shachris started at 7:40, at about 7:50 the Rabbi-Vecker would come into your room and start yelling at you about missing shachris and laying on the talmudic guilt trip. The smart people would shove themselves against the wall and crop up the blanket to make it look like they were already out of bed. The really smart people would sneak upstairs to a beis medrish guys bed and sleep straight through shachris, mishna brura seder and breakfast for am extra 2 hours of sleep. Nowadays I just hit the snooze button and roll over for another 3 hours of sleep.

← What’s under the modest swimwear?
Is orthodox Judaism sexist? →

43 comments for “The useful things I did learn in yeshiva”