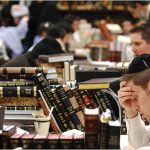 Someone was talking about this thing called Oregon Trail tonight and she was aghast that I had no idea what it was. She said “didn’t you use Oregon Trail during computer class in school” to which I responded “huh, you know, I never did get to use a computer in high school” which got me thinking about how I never really “learned” how to type correctly and so I use three fingers on each hand which produces an incredibly fast, inaccurate and loud typing. Then, I got to thinking about all the other stuff that regular folks probably learned during high school that I never learned.

How to dance: I guess it’s better that I had to teach myself to dance on my own, of course I have never actually danced with a girl (I don’t count club music and dry humping as dancing) so how I am supposed to know how to actually dance and being that the only girls in yeshivas were kollel wives there was really no one to teach us to dance around a ballroom in the first place. I always figured on marrying someone who could teach me to dance correctly.

Spelling: I am not sure how many of you folks have been reading this blog for close to 5 years, but you will notice a drastic change in my spelling. I used to get a lot more comments blasting my spelling and grammar usage than anything else and I always blamed this on a poor yeshiva education, where college is the devil and taking food stamps is seen as a good way to support the studying of ancient legislative texts while your wife nurses the brood.

Eating Healthy: Besides being a liberal ideal, eating healthy was just one of those things I never thought I would need. Let’s take a look at my diet when fresh out of high school, all I drank was generic brand mountain dew (I would drink more than 2 liters of it a day) for meals I would scrounge around for leftovers and everything else I ate was bread and pasta related. It took me a long time to discover that weeding myself off of sugar, ice cream and bread would work wonders for my tummy – it aint ever been flat, but the ladies have been flocking to me since.

Politics: The funny thing about yeshiva is that everyone loved talking politics, but all we ever talked about was how evil the liberals were and how moral and right the Republicans were. At the time I was sucked in by liberal bashing and hanging on to every word Bob Lonsberry and Micheal Savage would say, but as I grew up and started paying taxes I realized there are many more views than just right, left and center.

How to treat girls: I remember the Rabbis telling us to always make sure to compliment women on their food, but that was about it when it came to girls. I assume they didn’t want us to make any headway (or get any head) and by never telling us how to treat or talk to girls they did a good job at that. I remember being really honest with this one girl I was in contact with during high school and telling her that I liked her because she was hot, I should have just complimented her cholent or something. I remember a few years ago when I discovered two things about women that I thought were just sitcom style jokes – that putting down the toilet seat was really a big deal and that women liked when car doors were opened for them. All this time I had thought those two things were just pop culture type of jokes.

How to cook: Some guys did teach themselves to cook, the food was horrible enough to make it worthwhile. Most guys had sandwich makers, irons and George Forman grills which were every yeshiva guys best friend. One year some guys got entrepnurial and they opened up Lackey’s Deli – for $3 you got a roll with some mustard and deli meat – all purchased down the block, but due to laziness and terrible dinners – this deli made bank. During the summer months guys would barbecue, but I’m not sure that anyone actually knew how to cook. I myself never cooked a thing until I got out of yeshiva and was thrust into a world of angel hair and tuna.

Hebrew: You would think that a yeshivas first priority would be to teach you Hebrew so you can learn on your own, but they didn’t teach Hebrew (unless you count the 30 minute class to fulfill our language requirement) well enough that we could actually open up a sefer a learn for ourselves. Of course, they may not have taught us Hebrew because then we would have been able to think for ourselves and find all those loopholes and different opinions in the scripture.

← Converting can really be a gut wrenching process
Have you ever seen a Jewish Jihad video? →

64 comments for “The things I didn’t learn in Yeshiva”