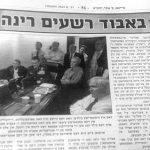 It has happened dozens of times before, but never has it reached such a huge audience. I am talking about the infamous photo-shopping of the very untznius picture of Hilary Clinton watching the Osama Bin Laden raid. In statement released by the Brooklyn Hasidic paper Der Zeiting, they claim that the picture showed Hilary Clinton very far from any kitchen or baby labor room – greatly reducing her modesty levels. There was also another woman in the room which means there was no yichud involved, but there was clearly no mechitza and that is the root of this news story.

“Placing a mechitza in the picture would have been too hard” according to Der Zeitings chief editor. “Rather than doctor up the picture to the point that our more modernishe readers would know the mechitza was fake, we decided to remove Hilary and the other woman – thereby making the picture kosher for all of our readers”

There has been an outrage from many news sources across the country, claiming that “just because chassidic Jews find Hilary sexy, doesn’t mean they can use their religion to go against the law, besides no one else finds her to be sexy one bit – she has been named by many periodicals as the worlds most manly woman politician” The picture clearly stated that it was not to be altered in any way, but unfortunately, most of the staff at the paper only read Yiddish, it is a Yiddish paper after all.

Many are calling this a good excuse for anti-Haredisim, which has become more widespread ever since they decided to beat up women sitting on the front of the bus, protect molestors in the name of shidduch resumes and run over cyclists due to bike lanes bringing in unztnius hipsters to their neighborhoods. “We are just trying to practice our religion” has been heard throughout the Haredi media today. Unfortunately for them, experts have been unable to find any place in the Torah that warns against fully clothed women watching wartime footage.

Editors note: I didn’t originally write about this, because it happens every day, every Haredi publication alters pictures so that women are not visible. The Yated, Mishpacha magazine and others are all guilty of this “crime”, but some reason this particular case got out to the regular media, most via Failed Messiah (way to go, getting hat tips from Daily News and Huffington Post) and the Bin Laden raid was a big deal and it’s fresh in people’s minds.

Do I care? Not really – like most of the things the Ultra Orthodox community does in the name of modesty it;s a stupid mishegas and does much more harm than help. They may have high birth rates, but plenty are leaving the community and it seems to be shooting itself in the foot by trying to hang onto 300 years of customs born out of ghetto Judaism and not what chassidism was originally founded on.

A little while back there was a picture in which Laura Bush was standing with a bunch of frummies and she was edited out too.