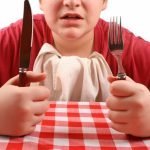 I was dating a girl a while back who told me that I chewed with my mouth open, “so what everyone chews with their mouth open” was my response and then to prove my point I observed people closely at restaurants and on shabbos – sure enough 90% of them chewed with their mouths opened. I failed to realize that all of those observed happened to be frum people and that until this girl pointed out this grave table manner passe, I had no idea that it was bad table manners in the first place.

Luckily for me, my poor table manners are a direct result of growing up without a mother in a frum environment, I was raised by men who were stuck in a Boro Park of 1947, where their mothers went to the shochet to pick out which chicken they wanted killed for shabbos – it wasn’t exactly the place for table manners.

I remember meeting someone who absolutely detested soup slurpers and yet another who couldn’t stand loud chewers, I myself couldn’t stand people who actually had stupid ass pet peeves like those and had to tell them so. Eventually I grew up a little and learned when to have manners, first dates are good times for manners, but after the third date you can let them slide a little bit – besides, most frum girls (obviously this does not include BT’s and Gerim) have just as poor table manners as frum guys.

Next time you attend a frum wedding (I’m not talking modern orthodox here folks) go around to the tables during the dancing that takes place between the main meal and desert, you will notice that hardly anyone (men and women) touched their knives or napkin.

I have been at dozens of meals where someone half stood up in their seats to grab something across the table instead of asking – this is a classic frum thing to do. You will notice that some frum men actually thank their hosts for meals and may even help to clean, but this is only single men which need to polish their shidduch grabbing skills, married men stay put and talk words of sports and Torah while the women folk schmooze with the singles about dating and kugel recipes.

You would think that frummies would have good table manners, after all we have a lot of time to practice. Unlike other folks, frummies have formal meals at least twice a week and many frummies have big meals at which to hone their skills, much more often than regular folks – yet they are severely lacking in the table manners department. Frum men shovel food into their gullets without caring if their sleeves ar dipping into their food, the love the lift plate and shovel from the center technique to get as much food in at once, some of them may be mopre polite and use bread crust to assist with this feat – but thou shalt not use a knife chas v’shalom.

← Do you think farting in shul is ok?
Orthodox Brides & the Royal Wedding; Fatah-Hamas Deal & Bin Laden Fans in Gaza →