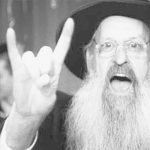 I recently ate a someone’s house who’s involved in Kiruv, he couldn’t find a house in the eruv so he had to settle for one outside the eruv and in order for his wife to get to shul with their small children when there are events she needs to attend – she hires a non-Jewish pusher, something I have heard to be shunned by the right wing factions of the Jewish community. When I asked my host of this, he stated that they received a heter kiruv, which led me to thinking of all these different heterim one could get if they are in kiruv.

Other possible heters for kiruv:

Allowing kol isha: You have to get those poor public school girls to learn the benching right?

Mixed dancing: What’s a good kiruv event without a lively havdallah – yes some girls and guys may put their arms around each other during a particular carlbachian high, but it’s for the best.

Mixed seating: I have noticed that many kiruv folks have evengts thatg are mixed seating and I figure that must be one more heter kiruv.

Internet: Though many espouse the banning of the internet once they achieve a certain level of frumkeit, they must get them there in the first place and there’s no better way to do this than through the internet – it’s a necessary evil.

Women as leaders: I have noticed that kiruv organizations like NCSY allows women to be elected to all sorts of leadership roles and although the official stance of Young Israel is to not have women as presidents, I always figured this was just a scam to make girls realize that being a leader is fine when you’re on your way up to a life of baby making and butter churning.

College: It seems that many kiruv organizations acknowledge that college may be kosher by sending young couples to be missionaries on college campuses, this means they are supporting those students with shabbos meals and basically saying that we will treat you like ordinary yidden if you attend college – just another heter I guess.

← Baal Teshuvas love bacon
What is the most neutral of yarmulkes →