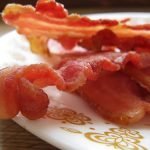 One of my favorite pastimes is getting baalei teshuva to talk about the forbidden things of their former lives that they miss so much and rarely does anything elicit the same response as talking about food, specifically bacon.

If you ever want to see an extremely animated discussion ask either of the following questions to some BT’s “what do you miss most?” or “don’t you miss bacon?” and most of the time you will hear drool filled discussions about food, fast food, good food and mostly about bacon.

Of course, the whole thing is strange for me, because the smell of frying bacon makes me gag, the thought of a cheeseburger grosses me out and drinking milk with my steak dinner doesn’t even enter my consciousness. Don’t get me wrong, there are definitely some popular creamy, meaty and cheesy combination’s that make me drool, but the major treife items make me want to puke in my mouth.

Every time I say something like “frying bacon makes me gag” it elicits the same type of response that Homer Simpson makes about donuts, BT’s just love bacon, but maybe that’s because everyone loves bacon, besides me.