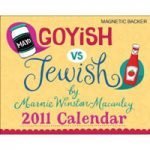 I’m not the hugest fan of making lists, but every once in a while I like to bust them out and this came to mind late Thursday night when I opened an email from a fan of mine who attends Ramaz and had an argument with someone there about whether Drakes Cakes were goyishe or Jewish and I really don’t know what the answer is, but if you asked me whether Pork or Cheeseburgers were goyishe or Jewish – I would have to say Jewish – since both are hated, revered and brought up to prove many Jewish points – I would label them as Jewish and not goyishe.

I had a pretty deep list by the time (aprox. 1 in the morning pacific time) I decided to post this idea to Facebook. Typically when I post an idea to facebook I may get upwards of 50 comments. I asked people to give me ideas for really goyishe things (I warned them not to be cheesy – still some people said things like “having concerts during the three weeks and omer”) and within several minutes there were 200 comments – no joke – as of now there are 425 comments on the facebook status update – a personal record.

This list can easily be extended to 1000’s of items long and I kind of want to do similar lists for each sect within Judaism and I hope that you folks can come up with some good ideas, but please keep away from the cheese. I tried to think of things that are REALLY Goyishe and you will notice that I tried to stay away from things like food and places that are very goyishe because that’s too easy.

← Hi you don’t know me – can I come for shabbos?
The Royal Wedding?: From a frum girls’ perspective →