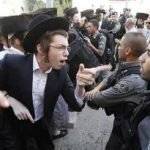 The old football injury is such a commonly used term in non-Jewish culture that I have wondered for sometime if there was a Jewish equivalent, as with most of non-Jewish culture we haven’t actually copied this saying yet and since most Jews are too weak, scrawny or nerdy to have ever played football enough to have an football injury, like most things we have to come up with our statement. Of course, we have so many sects within Judaism that each sect or movement would probably have their own excuses as to why they cannot help you build your succah, get called to do hagbah or help with any sort of other chesed project that requires heavy lifting.

Chabad: It was an old vegetable peeling injury: I thought of this post while trying to figure out how to make fun of the fact that chabadnicks are so crazy that they think God cares about whether they peel their already washed vegetables for pesach. I was thinking about my own root veggie peeling injuries the other day as I nursed an abrasion from the peeler I was wielding as I peeled a 50 pound bag of carrots for freezing over the passover holiday so we could preserve them for a fuiture veal stock or something. If peeling carrots caused me injury, surely a novice chabad lady in the kitchen trying to peel her lettuce would be injured as well.

Yeshivish: There are so many injuries that can come as a result of being yeshivish, have you ever seen a yeshiva bochur running down the street after his hat was blown off his head – oblivious to rushing traffic and passersby he runs in hot pursuit of his rolling fedora only to run straight into a bus, parking meter or frummie stroller train.

What about an old shteiging injury? Sure you have seen someone lost in the reverie of a really good sugya only to lean to far on his shtender to fall flat on his face in the middle of a thumb dip worthy chiddush.

Chassidish: There are just too many to think of, I mean the amount of effort alone to get into the skver bais medrish on a motzoi shabbos to hear the rebbe make havdalah can lead to many injuries. It was an old sherayim injury, I noticed the rebbe disbursing kugel he had just touched and I wanted a piece so badly I leapt from the bleachers only to be trampled by 30 other chassidim with the same idea – so many people got hurt this way hatzolah didn’t even bother coming and I just lay there thinking about all tbhose missed chances at hagbah.

It was an old shabbos riot injury – I can imagine that the free speech crowd of the 60s in Berkeley and the chassidim/charedim against any mechalel shabbos in Israel are pretty much the same. Two counter cultural movements spawned by low employment and belief in something that makes sense, but takes a bit more than burning dumpsters and flower power.

Modern orthodox: It was an old mixed swimming injury – my wife and I were at vacation village – way before they decided to impose the stringencies of separate swimming upon us and we were frolicking in the pool and I slipped on the way to join my wife and kids one shabbos afternoon.

Hippie Jew: It was an old 4-20 injury – I was getting ready to light up my bong on the second day of pesach one year and I burnt my caravan down, luckily I saved my stash, my techeles tzitzis and my Rav Nachman seforim.

Crazy BT: It was an old kotel shuckeling injury – I was in my first days of being frum, fresh off the extended birthright trip conspiracy and I literally smacked my head against the wall during my modiim bow that I was knocked out cold and when I was revived I was wrapped in red string and wearing dozens of chamtzas.

Reform Jew: It was an old Tikun Olam injury – I was doing my service for the Jewish ahem, I mean some other third world country people that like to kills Jews for the AJWS and I was almost killed during one of the frenzies to get to a UN Rice Drop.

Conservative Jew: It was an old High Holidays injury – I remember one year we were at temple and my ear was hurting, then the rabbi was a bit too loud during the yom kippur appeal over the microphone and I suffered massive hearing loss.

← The Quinoa Song
Looking for Rabbi to make golem →

7 comments for “It was an old football injury – Jewish version”