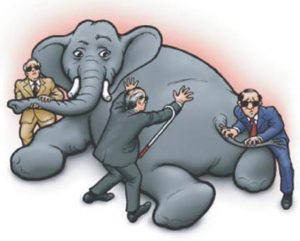 There is far too much to discuss in this week’s parsha to limit oneself to a single topic, and likely, kol hamarbeh, harei zeh meshubach (all those who elaborate are to be praised) — but let’s get started and see where we end up.

This week’s parsha nearly opens with the following insistence: “v’lifnei iver lo siten michshol.” (Leviticus 19:14)  How does one explain this in the vernacular?  Well, if one’s vernacular is English, it might be written, “and before the blind man place no stumbling block,” and that’s a pretty good translation.  But we don’t really translate the Torah when we write it in English as much as we interpret it — for all translation incorporates some degree of editor’s license and to deny this is being quite unsophisticated in one’s understanding of how powerful a tool language can truly be.

In his seven part lecture series on Mishlei (Proverbs), R’ Aharon Kahn compares the insightful verses within to King Solomon’s Song of Songs; he speaks about the meaning of the storyline and how it’s not meant to be taken literally.  But what he continues on to explain is that it’s not really meant to be not be taken literally — rather, it is clear that it was written as an allegory, making any word-for-word translation a perversion of the message.  Some people look at what appears to be a seemingly censored ArtScroll translation as a cop-out, but one who understands their objective in translating scripture will understand why they don’t vernacularize the text as an erotic love story.  Drawing another parallel, R’ Kahn compares this type of allegory to the verse of lifnei iver, in that it speaks not of blind people nor of attempting to trip them up.

The Sefer HaChinuch, in commandment #232, interprets this verse as such, referring to it as the prohibition to “not mislead a simpleton on his course” and continuing on to explain how the verse is to be taken completely figuratively.  In this sense, one who actually causes a blind person to trip by surreptitiously placing an obstacle in his or her path most certainly has transgressed a number of biblical imperatives (such as v’ahavta l’rei’acha kamocha, the “Golden Rule” of loving one’s fellow as oneself), but has not violated lifnei iver.  In the same vein, Maimonides insists that this verse is to be interpreted completely removed from its literal meaning.  (The Minchas Chinuch, however, does explain that one who trips up a blind person elicits a particular evil derived from this verse.)

But even according to Maimonides and the others who explain this verse figuratively, it is not that the words of the verse are rendered meaningless — because to be “blind” is not only to suffer a condition of the eyes, although that too is merely a reinterpretation as well.  This is made clear by the prohibition of providing bribes to judges, as it is explained that the bribe “blinds the eyes of the judges,” (Deuteromony 16:19) and the Torah certainly means to suggest that the judges lose their impartiality and insight, not their eyesight — exhibiting how the Torah makes explicit use of figures of speech as well as implicit ones, as in this verse.

← I just had chometz
The Quinoa Song →