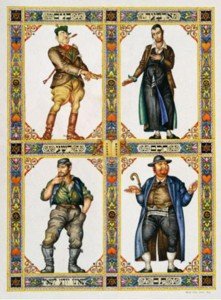 More important than knowing where someone is, is to know from where they come; this allows one to better gauge the person’s current position as a function of where he or she began and where he or she intends to go.

As Passover comes but once a year, I find it odd that people give divrei Torah about the Passover seder and say something like, “And this idea, which relates to ____, a highlight of the seder…” because nearly everything is a highlight of the seder.  We say these things once a  year and each paragraph can serve as a tremendous bundle of meaning, insight and life-lesson fodder.

With this in mind, I’d like to focus everyone’s attention on one of the highlights of the seder: the four sons.  While much can be said (and much is) about the four sons, one of the more frequently asked questions relates to the necessary contrast between the chacham (wise son) and the rasha (hmm…let’s call him the off-the-derech son) — in essence, they are asking the same thing: “what are we doing here?”  What then differentiates the wise son from the son who says something very similar yet is called “wicked” for it?

There are nearly as many answers given as the number of times this question is asked, and almost all of them try to reconcile the superficial similarities by focusing on the subtle distinctions, whether they be of grammar, vocabulary or something else.

A week ago, I heard an explanation quoted from the Gadol Shimusha that I had never heard before and that I thought was a welcome departure from the common type of explanations — it doesn’t attempt to respond to the question as much as it attempts to work around it.

One can say that before one may ask questions, one must show that one is not coming to mock and to ridicule.  One must approach without the appearance that one’s sole purpose is to express disdain — if that is the case, then no response will satisfy, because no response is really being sought.  Before we respond to those asking questions, we must ascertain their objective — is it to show contempt for the subject of their questions, and are they not even really looking for an answer, or are they asking in earnest, trying to gain greater insight into that which bothers them?  If one first says, “I recognize God” or at least, “I’m trying to recognize God,” we will allow them to ask, “Who is God, who is like God and what is this all about?”

It’s all in the attitude.  If one comes to ask with sincere inquisitiveness, we allow them to explore nearly everything — even heretical issues.  And so the wise son receives a real response because he asks with respect, rather than like the son we call ‘wicked’, who speaks with an inflammatory tone.  If the one who wants to reconcile is sincere, whether it be the off-the-derech child, the wayward spouse or the estranged relative, conversation is at least an option, but if there is no sincerity and the return is merely meant to antagonize, little can be gained by re-engagement.  And so the son is labeled a wicked son, and the response is not to him, for he’s not asking as much as he’s just challenging.  We refer to him in the third person, because we are not talking to him but about him, and we reply in the plural, because we are talking to the other three sons, providing an ample offensive against his attempt to stir up trouble.

In writing divrei Torah for FrumSatire, I try to look at things in a way that few look at them and even fewer will admit to looking at them.  I try to think about and write about what I think are interesting and important topics, and not accept things just because they’ve been accepted for so long by so many.  I hope there are those of you out there who appreciate what I have to say and recognize that there will be some difficulties and necessary compromises with any approach — but see that I ask only with sincere inquisitiveness and tread through serious topics with delicate concern for detail and truth.

Thank you all for the support I’ve received so far and looking forward to more opportunities for discussion and debate.

← The best pesach videos
Pigging out on carpas →