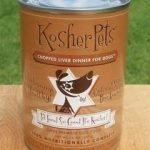 I can’t remember the first time I had heard that some brands of bottled water had kosher symbols on them, but I can remember how crazy I thought that to be, probably just as crazy as folks who grew up and never thought people would actually pay for water in a bottle, let alone need it to be kosher, but alas all things will eventually be made kosher. Heck, our aluminum foil has an OU, I have seen OU on dozens of inedible things that have nothing to do with food – yet the madness continues. Now you can get kosher pet food, which seems like an oxymoron to me – since pets, especially dogs are seen as treife by many frum folks out there.