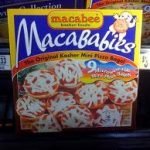 Starting a discussion on the best kosher pizza anywhere is a dangerous act, I one time asked my facebook friends where the best kosher pizza in Los Angeles was and an all out pizza war ensued. Everyone started attacking people based on what their response was, for every person that said Nagilla was the best, there was another person that said Pizza Maven was the best and anyone who said Nagilla was the best was a real moron and so the discussion went until I had to shut it down because we were getting nowhere. I have no doubt that a discussion about who makes the best kosher pizza in the New York area would also get some pretty interesting results, but more goes into the discussion than personal taste – for instance I love the eggplant pizza at Cafe Roma, but think their pizza is one of the worst in the city – it’s terrible by all standards, it’s just sentimental because I grew up eating that stuff, after Chez David on 84th and Amsterdam closed in the mid 90’s.

Since becoming a cook and a bit of a foodie, I haven’t eaten out much, for one I live very far from any really good kosher restaurants and for another my standards have gone up to far to enjoy the restuarants I want to eat at in LA, places like Shiloh’s La Siene and Sierra Tur are out of my price range, so I have resigned myself to eating pizza when I travel anywhere and I have my theories on where you can find really good kosher pizza, which is rare, due mostly to the wow factor.

Most kosher pizza is boring, the famous places like Jerusalem 2, Amnons, and Pizza Cave (in NY) all taste the same and feel that covering their pizzas in interesting toppings can do some justice to their terrible sauce and lame cheese.  I used to fall for the breaded eggplant and roasted garlic trick, but I have wizened to that BS.

So who has the best kosher pizza in NY?

I always found it a bit disconcerting that Di Fara Pizza on Ave J in Brooklyn considered by most folks to be the best pizza in New York is located down the block from some great examples of mediocre classic Jew York pizza places like Netanya and Pizza Time which are in itself a big debate as to which one is preferred, I prefer pizza time – but only because the service is better, it’s cheaper and the seats provide a better view of everyone else in the store.

I haven’t eaten in every hole in the wall in Flatbush, Boro Park or Tenack, but I have eaten in many and when it comes down to it, just like most of the other food available if one wants real good kosher pizza they have to leave the shtetl and head to the treifah median known as Manhattan. Although Cafe Viva makes pretty interesting pizza, I would venture to say that the best kosher pizza I have had in New York has been at Mikes Pizzeria on the Upper West Side (Mikes Bistro’s milchig place) and Rosa’s in the Empire State Building.

Both of these places were visited after working in a kitchen for some time, the other pizza I have had at random places in The Five Towns, Brooklyn, Monsey and Queens just failed to live up to my expectations of what a pizza should be. The sauce shouldn’t taste like it came out of a can, the cheese should taste fresh and the crust should be thin and crispy. I do wonder how many of the run of the mill places actually make their own sauce, if they merely threw some canned tomatoes into a robo-coup with some spices I’d be happy, but I’m willing to bet that most places supply their sauce from large Sysco cans instead of taking the time to do it right.

Other pizza of note:

While checking for the websites of the two pizza stores I ranked as best I came across this very good piece on Yeah That’s Kosher for the Best Kosher Food in New York City and it’s worth a look.

← The fables of Schwartzie: Part 1
Facebook Hagaddah vs. Google Exodus →

46 comments for “Who has the best kosher pizza in New York?”